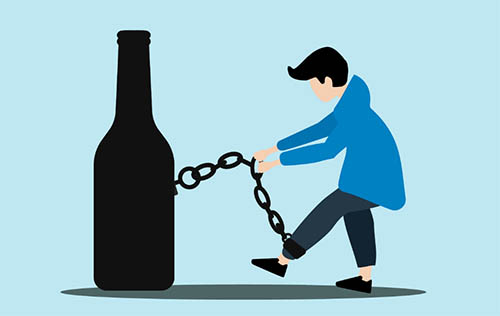 Our relationship has come to a decision point.  Although we have been spending a lot of time alone with each other, and have gotten to know each other quite well, I have decided it’s time you moved out.

You have become too demanding, too possessive, and too unhealthy for me. Others that I love more than you will no longer stay with me if I stay with you.  So, I am moving on and you are moving out.

I know I have done this before and always welcomed you back, and each time it was as … Read more...

Soul-sucking exhaustion. You know the kind of tired. So tired, you feel it in your bones. Facing the day seems insurmountable and all-consuming.  When you’re in this state of mind, being around others drains all your energy and you may even withdraw.

I hit this point when our family was participating in intensive outpatient treatment for Charles’s substance misuse. He had broken into a store, out of his mind after mixing sleep medicine and alcohol, and everything came crashing down. Nothing was going right. I was at such a low point, every task took so much energy and … Read more...

There are three paths from addiction: Recovery, Jail, or Death.

After we lost Taylor in 2018, I promised I would find a way to be part of making a dent in how we treat addiction and help create programs that would have helped him in this fight. Delegate Carrie Coyner, Anne Moss Rogers, and I took HB 928… Read more...

You can affect change. It’s not fast, it’s not guaranteed but you can improve your situation and create an environment for change. It’s important to understand how the person using a substance thinks and feels and how your actions play into their use. Empathy … Read more...

“My demons up against me
I’m facing them now
I wear the face of a clown
I feel so unloved
Because of the monster
Created from drugs.”

As most of you know I lost my son to suicide who suffered from an addiction to heroin. Many think he died from an intentional overdose. Not so. His death was far more desperate and visceral. My son would not have been counted in the stats of overdose deaths. We know 100k died of overdose. But what about all the other drug-related deaths? The accidents? … Read more...

“Your mom isn’t answering the phone.  I’m worried about her.  Can you check on her?”  Immediately following this text, my cell phone rang with a familiar phone number. It was my mother’s cousin, Laurie. I knew why she was calling.  Cousin Laurie spoke with my mother daily and routinely called me when she could not be reached.

Over the years, I came to address these calls with diminished urgency as experience taught me my mother was either ignoring the calls or incapacitated by her addiction to opioids. Cousin Laurie had designated herself as my mother’s keeper … Read more...

See the website here. Susan E. Casey is a grief expert and therapist who wants to help people find the light in grief. In this episode, you can join the conversation with a mother, Rebecca, whose son died from an accidental overdose, and how she is finding a path forward a year after her son’s recovery and shocking overdose.

Susan and I met a few years ago when I was writing Diary of a Broken Mind and she was writing Mining for Joy in the Deep River of Grief which is about sibling grief. She was my “beta reader” and … Read more...

The warnings would include the increased risk for mental illness. Recently, Colorado led the nation to become the first state to mandate stronger warnings on the high potency marijuana concentrates to its consumers.

It is a matter of public health, and human decency, that California consumers as well as other citizens of states where marijuana has … Read more...

When my mom asked me to read the reflection at Scott’s funeral, I thought to myself, “How can I sum up a relationship and a bond that I shared with him for 38 years in 3-5 minutes?”

Luckily, you all had the pleasure of knowing Scott as well, he was obnoxiously obsessed with the Chicago Bears, could sell anything to anyone, argue about anything to anyone that would debate him, and had a charming way about him as well as dashing good looks.

They say you get in the biggest fights with … Read more...

In Colorado in 2017, marijuana was present in the blood of 32% of suicides, ages 15 to 19 according to the Colorado Department of Public Health and Environment. My friend … Read more...