“If you’ve got something good, you better respect it
Hold your world and protect it
The only thing guaranteed in life is death
And everything looks sweeter when you haven’t any life left”

This one is the hardest for me to watch but I feel it reflects his creative genius the most. My opinion, as everyone has their favorite. As you will hear why, I lose it every time I listen to it. It is definitely dark but a portrait of a beautiful, tortured soul.

“Crap rap” as charles called it is not real rap. That’s the rap where they talk about titties in their faces and cash out their asses. It’s commercialized trash by entertainers more interested in cash than art or expression.

The genre of rap is a life story that’s raw and real. Authentic. Real rap is poetry to a beat and I think it’s gives males an excuse to write poetry and express their inner most thoughts and feelings.

And that’s a good thing, even if you don’t like what they write.

I think it’s the reason Charles didn’t take his life earlier than he did. His music was his lifeline.

I read most of Charles’ work after he died. That’s when I realized the depth of his creative genius. All his friends and his producer, told me how amazing he was.

He never showed me his music. And if he had, he knew I’d see the pain like I did in this video which at the time alarmed me and frightened me. What did I do with those fears? I know I called his counselor, Jim, in Utah. I don’t remember what happened but I am sure I had a conversation with him. Given that this was out there, I can’t believe I couldn’t imagine suicide in that last conversation before his death. Did I think it would go away?

I resent so much that his music was confiscated as “bad” at the therapeutic boarding school.  What I would give for those notebooks now. They shamed him for the darkness in his soul and force fed him religion as an alternative.

“Hip hop saved my motherfucking life So how the hell is it not therapeutic?

Now they’re telling me not to do it, but how the hell do you think I’ve gotten through it?” – Charles Aubrey Rogers

Some of his lyrics are sexual. He was, after all, a teenage male. He has one violent rap song. That scared me when I read it after he died knowing what a gentle soul Charles was. After research and reflection, I realized that male teenage fantasies often involve violence and by comparison, it was pretty tame.

Violence was not a common theme in his music. Depression, drugs and suicidal thoughts were.

I have so few of his notebooks. Thankful I have what I do because they offer a portrait of how he felt, his fall into the disease of addiction and into the darkness of major depression until his light shined no more. Nobody hid depression more expertly.. Because of these notebooks, I have an answer to the “why?” of his suicide. They are a part of my son I can keep forever.

It was important to Charles that I accept rap. It was his gift and he wanted me to understand it and appreciate it.

So one day when I walk into my office, he is waiting for me in his Dad’s computer like so many times before. He wants to tell the history of rap. He wants to convince me it’s not a bad thing.

So with a skeptical mind I shut my mouth, sat down and let him play music that is, by my own admission, not my favorite genre. But Charles had so much intelligence regarding the human mind. And he started by showing me Macklemore videos.

Surprisingly, I really liked this rapper. What he had to say. His social messages were good. Undeniably a talented lyricist, Charles knew I could not resist a good writer with a socially conscience story. Then he moved on and showed me other “real” artists and contrasted that with the crap rap to show me the difference.

It was a brilliant and passionate presentation that I will never forget. His earnest and hopeful face. His heart and soul on the line. How could I not start to see what a lifeline as he saw it as instead of how I saw it–a bad influence.

He was looking for my acceptance that day and I gave that to him.  And I am forever thankful I did.

Verse for the Lonely – by Charles Aubrey Rogers 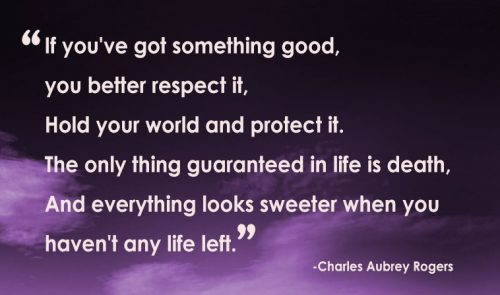