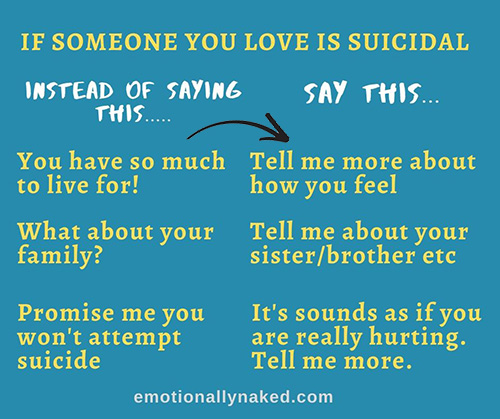 Don’t say: You have so much to live for!
Say instead: Tell me more about how you feel

Don’t say: You shouldn’t feel that way. You have so much going for you.
Say instead: How long have you been feeling this way?

Don’t say: Promise me you won’t attempt suicide
Instead say: Please put me on your call list if you are struggling. And while we’re at it, let’s put in some crisis lines now.

Don’t say: I remember when I had a breakup and I got over it and you will to. You’ll find someone else.
Instead say: That must be very painful to lose a relationship that you were so invested in. I know you loved him. Tell me more about how you’re feeling. I can’t fix it but I’m here to listen.

Don’t say: Think of what this would do to your family.
Instead say: You mentioned a sister. Tell me more about her.

Don’t say: Are you just trying to get attention?
Instead say: I’m here to listen. How long have you felt this way?

Don’t say: Suicide is a permanent solution for a temporary problem.
Instead say: I’m so sorry you suffer these unbearable episodes. You’re so brave to have endured them for so long.

One thought on “Suicide: Say this, not that”