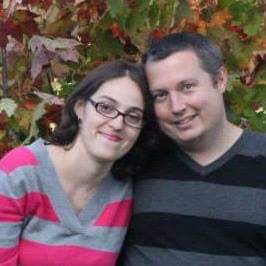 I was a popular student until the fourth grade when my dad became disabled and was in and out of the hospital up to 180 days out of the year.  I cried constantly, became withdrawn, my grades dropped some, and I lost most all of my friends that weren’t cousins.

Did I talk about it?

No, men are strong and are not supposed to show emotions in public.

Through the court system, my brother asked to be removed from our household. After it took place, he became more involved with drugs, a story for another day.

We also struggled with far less income and I became more withdrawn, internalizing all my problems and not dealing with any of them. I was bullied because I was different. How could a kid be normal with so much on his plate?

My dad had over twenty surgeries from the time I was eight through the age of twenty. To this day, he continues to be one of my primary worries. I grew up without my dad being able to play many sports with me. He played frisbee once after when I was eight once and it was the best day of my childhood.

My mom was his caregiver, a homemaker, and a woman with very little spare time.

My worst fear was that I would have children and also become disabled.

Fourteen years ago I left work early because I felt like I had a bad case of the flu. The next day I noticed it was coming from my back and made a doctor’s appointment. I had a MRI scheduled, had an appointment and two weeks later found out I had a Tarlov cyst in the sacral canal of my spine–the biggest on record.

This was my first time on heavy pain killers. I was on antidepressants, xanax, and klonopin and eventually started on the fentanyl patch for pain 50 mcgs per hour at first. I went to neurosurgeon after neurosurgeon who refused to do the surgery.

After two years, I found someone to remove my cyst which had grown and they removed part of my backbone to get it out and glued my sacrum back together. I hope the glue holds up.

The opiates were so hard to quit. This was about 10+ years ago and I had 120 pills that I could have taken to get me through but I weaned myself at first going longer and longer between doses.

As the length increased between the doses so did the anxiety and extreme desire for the medication. When I went cold turkey after a few days, I wasn’t able to eat,  or sleep. I was anxious, nauseated, and grumpy.

How did I get through this?

I prayed a lot for strength. You may think this story is over but that’s just the beginning.

I was working at a school when I was pushed from behind by a student and sent crashing into a heavy stage bench tearing my rotator cuff,  hurting my upper back and neck area. It was treated but did not improve and I didn’t want to have surgery right away, but Worker’s Compensation pushed me to have it done. I ultimately agreed and ended up in more pain and swelling and was diagnosed with complex regional pain syndrome (CRPS)–a rare disease I didn’t know existed and for which there is no cure.

I allowed the doctor to give me ten days of pain medication only because addiction is a lifelong disease and it’s easy to become hooked again.

CRPS is called the suicide disease and is at the top of the McGill Pain Scale. I was in significant pain and it wouldn’t ever get better.  I’m on a lot of medication to because on top of the pain there’s anxiety and depression. I tried a spinal cord stimulator trial, supposed to interfere with the pain signal but that made it worse. 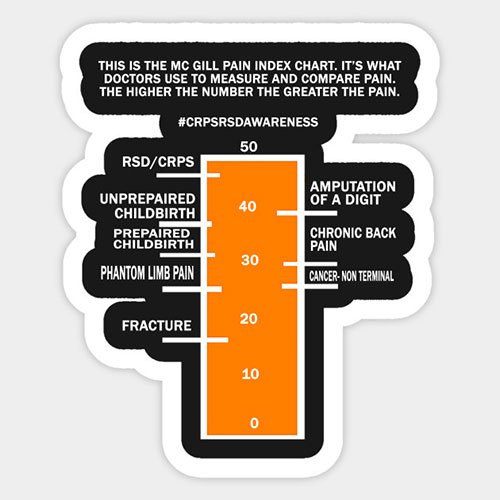 My medications for this disease started out as neurontin which made me suicidal and then to lyrica. I was also put on cymbalta for depression and nerve pain and valium for anxiety and muscle spasms. I was passing out from pain daily and my doctor recommended opiates and I took them. I will be on them again for four years soon although dosages are much lower. I was desperate.

The CRPS has spread and become full body

I can’t endure physical contact of any kind because the pain is excruciating. Even a cat hair can trigger extreme pain. I need help walking and have difficulty sleeping. I usually cancel on my friends if we have plans as the pain is too great. It’s not because I don’t like them, but it’s because I have more bad days than good.

I would describe the physical pain as a burning most of the time, but I can experience electrical pains, stabbing pains, and any other you can imagine. I have had a flare up since mid-July 2018 that has been getting worse. Showers are so painful, you have to work your way up to them and then it takes so long to recover afterwards–usually a full day for me. Imagine that you are on a rollercoaster and it starts to hail and they keep the ride going. That’s what a shower feels like for me now. I drop things continually as my grip is horrible. My muscles are deteriorating and I’m swollen all the time.

It physically hurts to even write this story

I have a BS in Psychology from Penn State University since 2003. I had returned to myself after a major back surgery and being disabled and addicted to opiates for two years so I know I’m mentally strong.

I was working towards my Master’s degree in mental health counseling and had all of the courses completed with a 3.87 GPA. I did my own mechanical work, my own carpentry, my own plumbing, etc. I loved to work. I am happily married and have three boys.

As the disease has progressed, my role as a provider as well as my favorite hobbies have become more and more impossible. Anxiety gets the best of me and I have frequent panic attacks which increase the pain. I was hospitalized once for being suicidal because that and CRPS go hand and hand.

The pain is never going away and really gets to me

Due to the opioid crisis in this country, doctors are scared to give out more than the guidelines, especially in Pennsylvania. They are told not to go over the equivalent of 50 mg of morphine. I’ve had a prescription for an electric wheelchair and other assistive devices since May of 2018 and have yet to get them. My ability to walk has gotten worse and I’ve fallen many times.

If you see me, I will put on a facade because it’s easier than explaining what’s going on with me. If I said I had cancer, everyone would know what is going on. I’m not saying cancer is a desirable disease, but people get it.

I have read that in the latter stages it can lead to death and read that about half of the people that get CRPS kill themselves. Research is being done all the time, but there’s no cure on the horizon. I believe that at 38 that I’m young enough that perhaps one will be found. Many have gone overseas for a cure, or so they thought, and one person spent her life savings and it didn’t work so she ended up killing herself.

Trials are being done in the United states on a drug to help,  however, it has only helped people with complex regional pain syndrome that have only had it for less than two years. I will continue to have hope for a cure. In the meantime, I need to redefine myself as a member of society somehow.

Opiate overdoses have not decreased due to the guidelines that are followed like they are laws. The CDC is not lifting the guidelines any time soon for pain patients.

These guidelines are keeping many CRPS patients from getting the relief they need and meanwhile suicide rates are going up for pain patients. There are two problems to the opiate crisis and that is supply and demand. If there’s a demand, the supply will be there.

When does a person reach a point to want to change?

I’m sorry for anyone who has lost anyone to an overdose or suicide. No parent should have to bury their child. May God bless each and everyone of you.