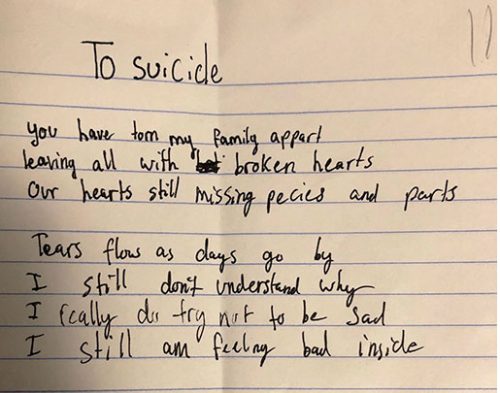 You have torn my family apart
Leaving all with broken hearts
Our hearts still missing pieces and parts.
Tears flows as days go by

I still don’t understand why
I really try not to be sad
I am still feeling bad inside.

This poem was written by an 11-year-old girl who lost her father to suicide. Sara Gaer, a suicide prevention advocate who focuses on first responders and preventing men’s suicide, shared this with me and it’s posted with permission from the 11-year-old’s mother.

Please stop, listen to that gut feeling that something doesn’t sound right. Then ask the question, “Are you thinking of suicide?” Think about families who have lost someone to suicide. Be there six months later, a year later, two years later.

Your best asset for preventing suicide? Your ears. Listening with empathy and without judgement is the most important thing you can do.