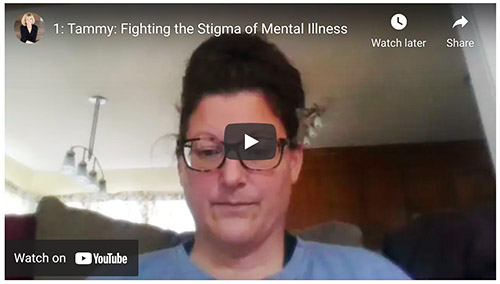 So I manage and cope with bipolar disorder and I am also a suicide attempt survivor. I am also a survivor of self-harm. I used to self-harm by cutting for several years.

Now one thing that I would like to clear up that I help fight with the stigma is
I do not refer bipolar as a mental health illness I refer to it as a mental health condition. the reason why I say that is because to me when I hear the word illness I think of sickness and my brain is not sick my brain just works differently than maybe somebody else’s brain does so that’s one myth right there that I like to fight
another myth is I will hear people say well you have to take a lot of medications no
for me personally, I take one medication, and that it that is it but that’s a huge part of my recovery.

So I’m not ashamed of taking medication if it’s going to make me feel better
which it does then I’m going to take it I also hear that you can’t be successful that is
also false I know for me personally, I am very successful

my full-time job is an educator I also work part-time and I also have I also coach
in the fall so to me, that’s being successful also during the midst of managing and coping with bipolar I remember having some really severe highs and lows during
college years

But I fought through and I was able to accomplish and earn my master’s degree so again that is an accomplishment right there.

Now a little bit about my story.

I felt different when I was in high school especially my senior year. That’s when I started to notice the real mood swings but I wasn’t really diagnosed until early in college. That’s when I was diagnosed, but again I felt these mood swings. I’d either be really happy and be able to stay up for hours and hours and sometimes days on end. And then all of a sudden, I would crash and then I wouldn’t get out of bed I wouldn’t eat, I wouldn’t sleep, nothing.

So I did have a lot of mania and depressive modes and I didn’t know why and I kind of just blamed it on hormones. Then, later on, I finally went to the doctor and I was able to get the help I needed and that’s when I was diagnosed.

So I want to just again help fight the stigma. I will share bits and pieces with my story throughout these videos but those were the main things and number one referred to as a mental health condition, number two you can be successful.”