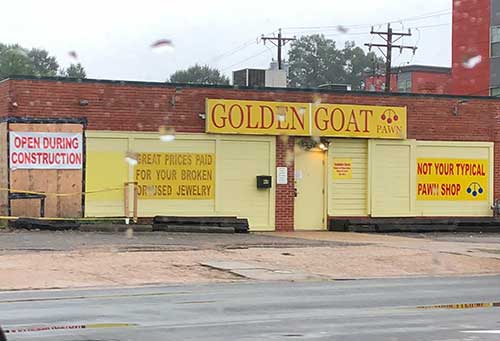 That phrase weighed heavy on my heart when Charles said it over the phone on Monday, June 1, 2015. The feeling it inspires now is the same–my own despair.

He had pawned his computer and his bike. He especially loved that bike and he never rode with a helmet. Funny, how I worried about a head injury when what I needed to worry about was the enemy living in his head.

The bike was just a possession but it was his last possession and I felt its significance. How desperate do you have to be to sell your last possessions? Addiction is such a vile disease, heroin such a demonic SOB.

From Stuart Court Apartments on Monument Avenue where he’d been staying, it was a twenty minute walk to the Golden Goat. But on the way there, he rode his bike for the last time. I knew none of that then. It would be years before I pieced all of this together.

When Charles called that week, I thought he was headed for rock bottom. And he was.

But his definition of rock bottom and mine were not the same. Somewhere in my head I knew that.  I wish I could have translated the dread I felt. But I couldn’t because the volume on suicide wasn’t turned up on my radio in 2015.

After Charles’ shocking suicide we had to go get his remaining possessions–his backpack, and the clothing he wore when he died which were stored in an unassuming brown paper bag.

As we went through his backpack, we found pawnshop receipts from the Golden Goat for his bike and his computer.

So there we stood. Three women in a pawnshop

My mother was one of them, my best friend, Martha the other and we were an unlikely trio standing there.  We would not have stood out more if we’d been wearing neon green fluorescent pantsuits.

The man at the counter looked at us, then at me, and then down at the pink slip I held in my hand. It would be the last time he made eye contact with me.

He took the pink slip for the computer and asked no questions because I think he knew the story. I don’t think we were the first misfits to come collecting our loved one’s last possessions after a drug-related death.

When he came back with the computer, I handed him a credit card and he had to tell us that they didn’t take plastic. Cash only. Of course.

So we left and went to an ATM and withdrew the cash and came back. Well, my mom did.  It felt grimy to be there. It’s a place that wreaks of desperation.

I could only get the computer because the bike would not fit in the car and Randy would come get that later.

Every time I see the Golden Goat, my heart seizes because, in my mind, it goes with the phrase, “Mom, I have nothing.” Maybe writing about it will diminish some of the shock of seeing it through my car window.