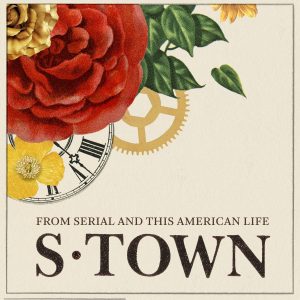 Note from Anne Moss: Jule is a 16-year-old from Germany who contacted me a while back to post this #griefheart for her friend Christian who died by suicide. This is her third contribution to this site.

(Major spoilers for the S-Town podcast ahead)

I read the “13 Reasons Why” book in 2011 and so naturally I watched the 13RW show right after it came out, ignoring all the trigger warnings concerning people who have been suicidal and having a trauma connected to suicide (because I have both).

Luckily for me, it worked fine and did not trigger any sort of episode. However, I do agree in that this show displays suicide as an act of revenge and does not explore the underlying mental illness problems enough.

So why am I telling you this?

Shortly after “13 Reasons Why,” I started listening to a podcast named S-Town which also explores the topic of suicide.  I would like to recommend it and here’s why.

When I first started listening to S-Town I had no idea what to expect of it and I had no idea that it would make me feel every emotion in the world.

S-Town starts off as a true-crime murder mystery until the end of episode 2 when reporter and narrator Brian Reed learns about the suicide of his friend John B. McLemore, at which point it turns into an exploration of John’s life. In this way, I feel like it resembles Anne Moss’s blog, who tries to understand what Charles’s life was like–especially in his last months.

The podcast (as well as this blog) does a good job in trying to understand the suicide but never trying to glorify suicide. Because it is a true story, the emotions are very raw and relatable, like the shock when Reed learns about the death.

There were also many aspects of the aftermath of losing a friend to suicide that I could relate to, for example my friend’s funeral, like John’s in the podcast, felt very un-personal and didn’t reflect their respective complex personalities.

S-Town has been criticized for not respecting the privacy of a dead person and becoming too personal, but I think that this is what makes the podcast unique and special. It helps promote understanding for those who have never understood what brings a smart, creative and special person to end their own life and that suicidality has many facets that are part of the final decision to do it.

I would recommend S-Town to everyone.

Because it is a podcast, there is less risk of problems with graphic triggers. And unlike “13 Reasons Why,” the way he died by suicide is not described in explicit graphic detail. It might be very emotional, especially for those who have had a similar experience (like I did). But in my personal opinion it is definitely worth it.