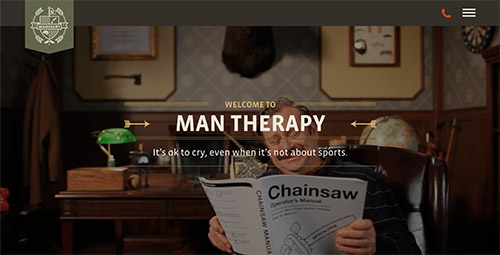 A friend of mine and top researcher in suicide prevention, Dr. Sally Spencer Thomas, wanted to figure out how to reach men who might be struggling with some kind of mental health event or condition. A lot of her work centers around the corporate world and the construction industry, the latter having the highest rate of suicide. She is also a suicide loss survivor, having lost her brother, Carson, decades ago.

She ended up working with an ad agency to execute a way to reach men using humor. The site is ManTherapy.org. There is a lot more to the story and the research behind it. This website also has an Australian version as well as a self-assessment, also known as a head inspection. Hey, you might as well, right? No one looking over your shoulder.

So if you have a dude in your life who’s having a bit of a time catching z’s or maybe having too many pints at the pub to tamp down the stress, you can steer him here. The humor takes the edge off. Do share this resource! It works.

Richard mahogany videos (these are so funny)

2 thoughts on “ManTherapy.org – Sometimes life’s dog takes a dump on your lawn”