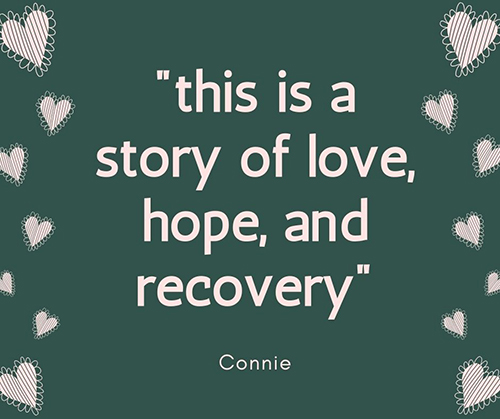 New Year’s Day 2020…my cell phone rings, I recognize the number. It is our son, who has been in an addiction spiral for the past eight months.

Another New Year starting with the same message for the past 15 years. With each request, rehab, and relapse my husband and I had grown weary from the emotional, financial, and spiritual drain this disease had inflicted upon our family. We had learned detachment, setting boundaries, quit enabling, and threw out tough love methods.

We were exhausted and ready to give up and disconnect from our only child, but….this is a story of love, hope, and recovery.

We were blessed with a beautiful baby boy after 9 years of trying unsuccessfully to have our own biological children. Miscarriages and ectopic pregnancies had squashed any dream of having a family of our own but we were able to finally adopt an infant from the Dominican Republic and he completed our family.

He was a funny, bright, athletic young child and as he grew older his love for computers and anything electronic was obvious. The school was not his favorite place to hang but he managed. He was diagnosed with an auditory processing disability in third grade and started on medicine to help with his school work and listening. Poor choice on our part as I look back now, it probably flipped that genetic light switch so many of our children have towards addiction. The drug was Adderall and was being handed out like candy in the early ’90s.

My sweet young boy was becoming more and more difficult and less communicative about everything. His friends were changing as was his dress. After walking in from a wedding to find him and a group of teens in our home that I had never met before drinking and snorting lines of coke did I believe we had a problem? Not even when I walked out to go to work one morning and found my car wrapped in saran wrap, the tailpipe stuffed and the words ‘your son is a coke addict’ spray painted all over the road in our cul de sac did I believe it!

Denial is a powerful emotion, especially when it comes to not wanting to see something that is so apparent but also when your worst fear is becoming your reality and you don’t know what to do.

New Year’s Day 2008 early in the morning we were confronted by our son crashing through the front door very paranoid, panicked, and agitated. He had ‘lost’ his then girlfriend and as he lay cowering in our bedroom closet, he was screaming the FBI and CIA were out front and waiting to arrest him. The level of paranoia was frightening and I immediately called the police and the county social service emergency contact. He needed to be TDO’d, (temporary detention order), for his own safety and others as well. He obviously had many drugs on board and he could harm himself, us, or others. He was taken by the police squad to the local ER and admitted.

Blood work confirmed he had at least five different substances in his blood which was probably contributing to the extreme paranoia and agitation we were seeing.

The year was 2008 and there were limited resources or discussions about substance abuse. We knew we had to find a discharge plan for him and we were scared.

When he was cleared medically, we enrolled him in a wilderness program in Utah followed by a therapeutic boarding school in New Mexico. We threw as much money as was needed because we foolishly thought we were going to “fix him” and he would come back healthy and able to move forward with his life. This was such naïve thinking on our part. If we had understood the trajectory of this disease and how this disease progresses, we would not have chosen the path we did.

There are many pathways to recovery

This is not a one-size-fits-all disease and the medical community has moved forward in identifying the best treatment course for those who struggle with substance use disorder. Recovery community organizations with a sober living environment, peer-to-peer support, and treatment of any co-occurring mental health issues through cognitive behavioral therapy, Smart or Craft programs, and Medication Assisted Treatment have become the standards of treatment currently. Families need to be supported as well and groups such as Families Anonymous, Alanon, etc have met that need over the years.

We allowed and supported our son in New Mexico for another year after he graduated from high school. He had found a job he liked and he wanted to stay in New Mexico. We agreed but now understand how important it is for the addict to have a strong support network those first years of recovery and beyond. His ego has always been his downfall with this disease and he relapsed shortly after graduation.

This began a roller coaster ride of recovery and relapse that has lasted for over ten years.

He returned to Virginia in 2010

We have been through the criminal justice system, hired top lawyers to defend him, dealt with prejudiced judges and probation officers, multiple therapists, and every sober house/recovery community/rehab in our city–sometimes with multiple attempts. Jobs that paid minimum wage and homelessness, being beaten up, and hanging in some very dark parts of town became his life. The life for those who struggle with this disease and are not ready for recovery is living day by day and looking less and less like the person you knew.

With each rehab our hope was he would get his wings and fly–instead, his wings had been clipped by this disease and he fell. But for a brief moment with each attempt at rehab, I saw a glimpse of the son I knew and loved.

With each relapse, he became a darker soul, one I couldn’t stand to be around or no longer knew. I would look at him and struggle to see that kind, sweet caring young man I knew so many years ago. So much time has come and gone..years of loss. Part of me has died as I am sure did with him as well. His own hopes and dreams squashed …jobs that he should have flown in now a distant memory.

It took its toll on my husband and me financially, emotionally, and spiritually. I was fortunate to find a group of other moms in a Families Anonymous group that I bonded with and who have become lifelong friends. We were all fighting the same fight and knew and understood how each of us felt and always with no judgment. Educating myself about the disease, understanding that this was not a personal choice but rather a brain disease that could be linked to a genetic predisposition, an acute childhood event or co-occurring mental health issue made it less frightening but no easier to embrace.

Had he hit that bottom we hear so much about? Help was available through our local RCO and another recovering addict recommended a facility out West that he, as a chronic relapser himself, had finally found success with his own recovery. We had our son on a plane that afternoon with the understanding that he needed to find employment and begin covering his own expenses within the next few months.

It has not been a straight trajectory and there have been times when I wanted to cut off all communication, but I believe it is always important to keep those lines of communication open, no matter how painful.

He is currently coming up on 19 months of recovery and working at his dream job. He has found himself in a good sober support group and is learning how to handle life on life’s terms without the use of drugs or alcohol.

I honestly never thought we would see this day. There were days of so much pain that I would ask God to take him because I wasn’t sure how much longer we could all go on.

If I felt that way imagine how he must have felt?

As a parent perhaps the most important piece of this journey is learning how to take care of yourself, your marriage, and any other children you may have in your family. Addiction is an insidious disease and it will drain you if left unchecked.

This is no dress rehearsal. We all only have one life to live and we need to make the most of it despite this disease. Truthfully, some days are easier than others and none of us knows what is in our future. Don’t sweat the small stuff, because it is all small stuff and remember –One Day at a Time!

Support for parents of the addicted

Central Virginia support for parents of the addicted