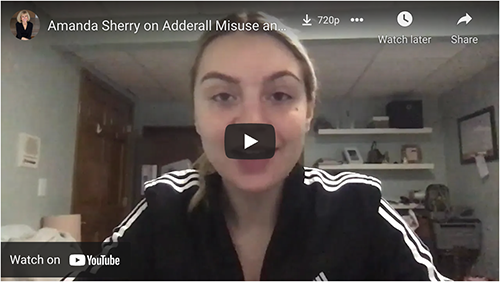 This video was originally shared with me by Tara’s mother, Catherine McMahon Miles who lost her daughter Tara Marie McMahon (12/18/98-2/21/21) to depression that was complicated by an Adderall addiction which led to her suicide. Tara had been off Adderall for a year but had self-medicated her depression with it previously and she had called Adderall her “death certificate.”

In Tara’s journals, she asked her family to share her story to help others and the video was created by her best friend in college, Amanda, and originally posted on Facebook to warn others who might be thinking that Adderall is a harmless “smart drug” for getting better grades which it is most decidedly not.

From Catherine McMahon Miles in memory of Tara Marie McMahon

Tara was my youngest daughter, she was beautiful inside and out. Tara was kind, selfless, loving, and had an infectious laugh. She enjoyed concerts, hip hop, and rap music, spending time with friends, tailgating and she was an accomplished equestrian. She grew up in the Washington, DC suburbs and then attended college at Michigan State University where she studied political science and hoped to pursue a career in law.

She loved the cold weather! Tara was larger than life, she wasn’t a fan of rules and she lived life on the edge….. she left a huge impact on all who knew her. Unfortunately, she also suffered from anxiety, depression, and addiction ….. she fought hard, she tried all types of therapy and medication but, she lost her battle in February 2021, the demons were too great.

Tara didn’t want to leave us, she just didn’t know how to stay. She left behind many journals which have allowed us to understand her pain and why she felt that taking her own life was the only way to end her pain. We hate that she is gone, we miss her terribly but, we respect her decision. She asked us to share her story to help others and we will do so and we will keep her memory alive and in our hearts forever