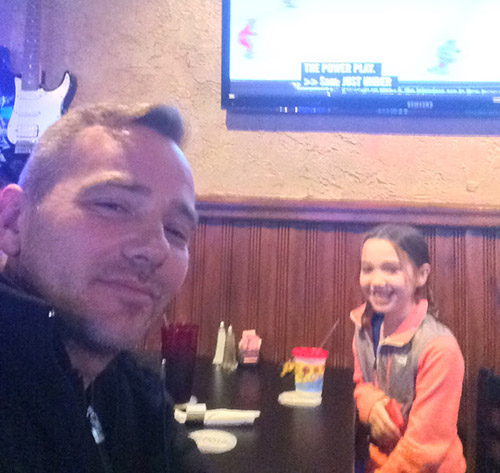 by Kiernan Gallagher, 15 years old
Published with her mother’s permission

One I never wanted to imagine. But instead, I now live it.

They say it gets easier.

It doesn’t. And I knew that from day one.

It’s been over a year and I still remember everything. I still feel everything.

Of course it’s all traumatizing. But there are so many little parts of the event that are their own traumas. Hearing the shot. The first look. My phone call. Doing laps around my house, just waiting for 911 to finally arrive. Family showing up. The words “Sean has died.”

“Sean has died.” My heart sank to my stomach and my throat ached. All I could do was scream. One thing I thought I knew for certain in that moment was that he was going to live. Everything would one day be okay. I knew that had he lived, it wasn’t all going to be sunshine and rainbows right away, but he wasn’t gonna die and that was all I needed to know. Clearly, I was wrong.

The moment the bullet hit, there was no going back.

But what could’ve gone back and been changed? Why was I so oblivious to what was going to happen? If ever given the ability to go back in time and change my actions, I’d change countless things. My bones ache for him, trying to understand the weight he carried each day. But my heart aches even more trying to understand the real hurt and sadness he felt.

I mentioned small moments of September 25, 2019, that traumatized me. All of this night lingers everywhere. Holidays are broken. Special occasions are broken. Even a random f*&$ing Tuesday is broken.

So many thoughts of him, and what he should’ve been, flow.

Events hurt; he won’t be walking me down the aisle on my wedding day, he won’t be in the crowd at the end of my education journey, he won’t meet his grandkids. But the little things hurt too. He’s not working on the cars or anything and everything else with my brother, not napping on the couch in the living room, or showing off in whatever car he decided to own at the time. My dad was everything, and our relationship was everything.

All of the adversity turns into opportunity, though. It’s not like life was perfect before this, either, so I grew up rather quickly. I’ve learned a lot throughout it all. Here are some of those thoughts:

I know that a part of me died when my dad died. But I also know that a whole new maturity level was born. None of this was part of the plan; none of this should’ve happened. But there’s nothing anyone can do. I’ll never forget my dad. Anyone who knew him won’t, either. And I’ll never stop missing him. I hope to see him again one day, but for now… he’s in my dreams.  He’s the red cardinal sitting on the fence. He’s the dancing flame on the candle. He’s that one song on the radio. He’s still with me, in spirit — and this I know for certain.

8 thoughts on “What’s life without you?”