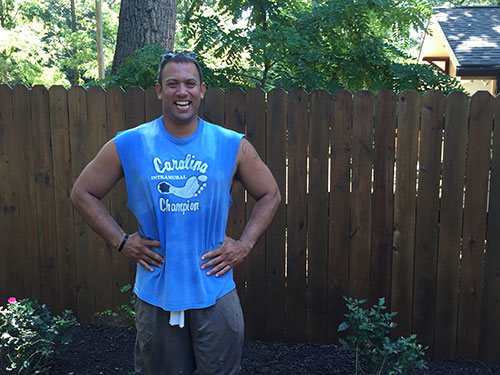 Randy: “Hi. My name is Randy Rogers and I am calling you to find out if any of the guys in the recovery house need to make some money because we need some landscaping done.”

Lee: “Yeah. There’s a guy named Chris. Come by on Saturday and I’ll introduce you.”

My husband, Randy, goes to the recovery house where Lee is house manager. This was where Charles lived for a single day before his relapse and ultimate suicide. Instead of the 19-year-old named Chris that Lee told us about, he introduces my husband to a 37-year-old Chris instead. Lee tells my husband he doesn’t think the other Chris was ready yet. For cash or responsibility.

But Chris Baker was several months in sobriety, around 4.5 months at this point.

Chris Baker stands up, my husband looks up. He looked pretty imposing. With a short haircut, he looked downright intimidating. My husband’s mind hesitated but tried not to show it outwardly. Chris was over six feet, all muscle and a robust build. Was this safe?

Turns out Chris was a big teddy bear with a heart the size of Texas. He was originally from Louisiana and it would be later when we’d meet his parents, his best friend, and his little girl. He showed me pictures of his trip to visit family. He couldn’t wait to see Lucy, his little cousin. Chris loved kids, his family and wanted recovery so badly because he wanted to be a good Dad for his girl.

Chris was Randy’s bridge to emotional healing after Charles’ suicide

I had the blog. Randy had Chris. OK, I had Chris, too.

I posted Chris’ picture on our neighborhood site and helped him by allowing him to use some tools to get started and people called because he did meticulous work.

We helped him by hiring him, promoting him, and one time we donated through JHW Foundation so he’d be able to make that last little bit to make rent. We didn’t want him to know it was us.

Chris became part of the family and we became the surrogate aunt and uncle. He took great pride in the yards he landscaped including ours. In fact, most the yards on the house tour in our neighborhood recently reflected Chris’ handiwork.

He painted a house for a car, got his license restored, worked his butt off to pay all the fines. He found supportive friends, supportive groups, caught rides to meetings, invited others to meetings, supported those struggling and sought help for his depression.

Andy jumps up on my husband whom he adores. And he would hop up and down all over Charles, of course, since Andy was his dog.

Only one other person in the world earned that distinction and it was Chris. As a result, he did a lot of pet sitting when we were out of town. I didn’t know someone could spoil our dog more than Randy.

He was intelligent but was never beneath manual labor to maintain sobriety which he worked hard at. Achingly hard. He worked his way up to house manager at the recovery house, was a shining example of a sponsor, went on trips to fetch those who had relapsed out of hotel rooms and where ever else a friend in need might be.

Unfortunately, he lost his house manager position over a dispute and moved out to join another house, took another job at a gym helping procure new clients. It was all going well and then, just shy of eighteen months sober, Chris relapsed and we lost touch. It all happened so fast and then he vanished.

He worked in Louisiana and then Tennessee desperately looking for recovery but struggling to find it. Crack cocaine and alcohol luring him into the dark corners he so wanted to avoid. His depression pushing him there.

The video below was about Chris. My husband and I wanted him to know we still loved him even if he was using–something I feel I don’t think we communicated well to our son after he relapsed because we were so shocked. It’s never wrong to let our loved ones who suffer from SUD know that they are loved no matter what.

Finally, he returned to Richmond, broken, skinny, looking drawn and weary at 39. He admitted he was still using but wanted to find recovery again. We’d gotten scattered news along the way. But shame prevented him from contacting us as often. I was sorry about that and told him we loved him no matter what.

His living conditions were not ideal at first but he had a roof over his head and a bed. He was scratching his way back into recovery, had a job so we sent him a bus pass so he could get to work and ultimately he got back into recovery and was feeling good about his thirty day chip.

I saw him just a week ago when he came by to do the yard because my husband was out of town. It was hot so I loaned him my small cooler with water. I didn’t know he had relapsed again but I did notice he didn’t make eye contact so I had a feeling something was up. He gave me a hug and I could sense some hurting but he covered it well. Depression? Something else? My mind didn’t dare go to relapse. He had just gotten back in at the recovery house where we had met him.

It was Tuesday we learned his roommate found him unresponsive in what is suspected was an accidental overdose.

Someone had said “Rest In Peace, bro.” My heart lurched and my mind wanted to grab any excuse of why I might be reading what I saw. A phone call to Lee revealed he had died. Not the news we had hoped to hear three days before our son, Charles’, fourth death anniversary.

Dear Chris, you gave a lot of love and you helped us find emotional healing after our own son took his life while going through withdrawal. And for that we are forever grateful. We love you.

Another video of Chris is here. He really was a speaker with amazing potential to motivate.

43 thoughts on “In memory of Christopher Baker, a wonderful human being”