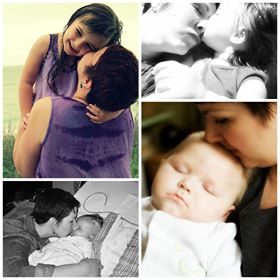 Picture caption: Mother to a daughter. And a baby son lost to a brain tumor.

I wish people knew that this day, now over-commercialized, over-sentimentalized, overblown and over-filled with spending, obligation, and long waits at any brunch-worthy restaurant, was first created by and for bereaved mothers who shared it with all other mothers.

They started it not to elevate to superiority the mother and her role in family and society, or even to simply honor motherhood.

Did you know that the women who started Mother’s Day were actively working to help lower infant mortality rates? That they protested the wars that had taken the lives of their sons? That they were working to form bonds with other mothers whose children were also lost to war?

Headed by West Virginia activist Ann Jarvis, a bunch of bereaved mothers got together for peace demonstrations. They held work days for service. They tended wounded soldiers from both sides of the Civil War that ravaged our country and left hundreds of thousands dead. They organized picnics for pacifism and worked to unite the country in hopes that no one would ever again lose a child to the horrors of war.

In 1870, one of their members Julia Ward Howe, best known for composing The Battle Hymn of the Republic issued a “Mother’s Day Proclamation” calling on women to take a more active political role in the promotion of peace and the ending of wars.

She wrote:
“Arise, all women who have hearts, whether your baptism be that of water or of tears! Say firmly: ‘We will not have great questions decided by irrelevant agencies, our husbands shall not come to us, reeking with carnage, for caresses and applause. Our sons shall not be taken from us to unlearn all that we have been able to teach them of charity, mercy and patience. We women of one country will be too tender of those of another country to allow our sons to be trained to injure theirs.!’ From the bosom of the devastated earth a voice goes up with our own. It says, ‘Disarm, disarm! The sword is not the balance of justice.’”

For sure it is one of the most difficult days of the year in the continuing cycle of my grief calendar. We are a family of four that looks to all the world like a family of three. My child is not an only child, though she appears to be. She lives without her brother as a physical presence in her life. I don’t think it’s always easy for her.

It’s impossible to truly find the words to adequately express the pain and longing that continue to be part of daily existence without my son’s living and growing presence in this world. He should be here on his birthday this month to celebrate. It is difficult for me to imagine what he might look like.

My motherhood for both of my children is special and sacred and also totally ordinary. I am a mother among many mothers. Early on in the searing and raw pain, I felt a deep connection to the many bereaved mothers who I realized existed in the world all around me and those who had already grieved the deaths of their children for millennia before me. I was neither special nor alone, and this realization brought me strange comfort and a sense of timeless connection.

Bereaved motherhood is worthy of being acknowledged, honored and recognized along with every other kind of motherhood. Knowing the mothers who began Mother’s Day did so in their grief, in their hope of stopping the ravages of war that took so many of their children makes this sense even more profound.

I want to take it back

To take Mother’s Day back to its origins. I would love to see a world where we are not treated or seen as separate because of our grief. Or avoided or pitied. I want acknowledgement on Mother’s Day for mothering both of my children, living and dead.

With all my heart, I want all bereaved mothers to be acknowledged as the mothers they are, we are, on Mother’s Day–along with all other mothers. We are all mothers and should be honored as such.

This Sunday, on the traditional Mother’s Day, I will remember this day created by bereaved mothers; those who sought to make meaning of life after the deaths of their children, who looked to promote peace and togetherness in their world.

As Julia Ward Howe said, “We women of one country will be too tender of those of another country to allow our sons to be trained to injure theirs.” Her plea touches my heart.

Her plea, their movement, was an incredibly personal way to try to achieve global peace. Most people do not know the origins of Mother’s Day. I wish everyone did.
​
Regardless, Mother’s Day is upon us. Whether we want it or not. Whether we get to be with all of our children or with our mothers or not. However we feel about it, it is here.

To all mothers who are without their children, to all children without their mothers. I wish a peaceful Mother’s Day and send love.

Karla Helbert is a licensed professional counselor (LPC), internationally certified yoga therapist, (C-IAYT), registered yoga teacher (RYT), award-winning author, and a Compassionate Bereavement Care Provider certified through the MISS Foundation, the Elisabeth Kubler-Ross Family Trust. and the Center for Loss & Trauma. Counseling and supporting those living with traumatic grief and bereavement is her main focus of work. She has three books: Yoga for Grief and Loss, Finding Your Own Way to Grieve: A Creative Activity Workbook for Kids and Teens on the Autism Spectrum,The Chakras in Grief and Trauma: A Tantric Guide to Energetic Wholeness

(opens in a new window/tab)

Karla is a licensed professional counselor (LPC), internationally certified yoga therapist, (C-IAYT), registered yoga teacher (RYT), award winning author, and a Compassionate Bereavement Care Provider certified through the MISS Foundation, the Elisabeth Kubler-Ross Family Trust. and the Center for Loss & Trauma. Counseling and supporting those living with traumatic grief and bereavement is her main focus of work. View all posts by Karla Helbert