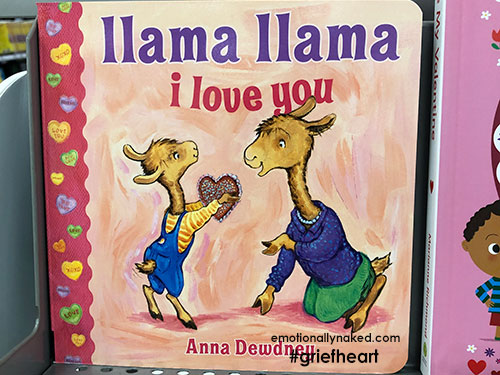 When my boys were little, we’d walk into the library to get books related to certain holidays and in February, they’d have valentine-related books on top of the bookshelves. Both my sons loved books but Charles didn’t understand why we couldn’t take twenty or thirty books home.

This llama llama book book came out when he was a teen but I remember he had a saying  about momma llama love and I can’t recall the context in which he used the phrase. He would pick out pretty much all that would be on display and more and I would attempt to cajole him into leaving some for other kids. until one day I said “Fine, we’ll take home as many as you can carry.” Then the librarian told him there was a limit so Mr. Negotiator started in on her and it was all I could do not to die laughing as this three-year-old made a convincing case for checking out more books. It didn’t hurt that he was adorable with shock white hair. He did manage to get a few over the limit of seven that time.

I would have to read and re-read them before he could read starting at age three. By the age of five, he could read Captain Underpants books and the Goosebump series but he would still beg for me to read to him, too, because he wanted to cuddle up. Even back then suffered from insomnia and hated that lonely feeling that went with trouble sleeping.

He loved books about love–books like “Love you to the moon and back.” And he would make me a Valentine every year.  I miss the child who gave love so unselfconsciously and so often.

Love you to the moon and back – #griefheart number 84