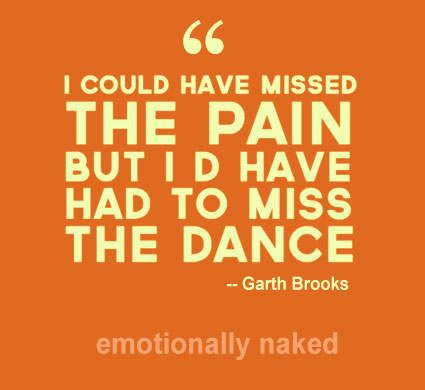 My favorite song of all time is called The Dance by Garth Brooks it has a lot of meaning to me.

First, it reminds me of a special friend of mine, Brian, but we called him Rini. He and I would dance at the various dances we had at school. We were very close and shared a lot of memories –school, parties etc.

Unfortunately he took his own life February 20, 1996, a day after my twin’s and my birthday. My twin brother was good friends with him as well and now all I have left are all the “dances” we shared.

If you listen to the lyrics, it says:

It has been over 22 years since Rini died, and some years it is still hard to accept. But in my mind and heart, I am so glad I did not know what was going to happen because if I did then maybe I would not have been friends with him.

I am grateful and thankful my own suicide attempt did not take away the dances in my life. I look back now and think, “Wow I would have missed watching my nieces and nephews grow up.” I have been able to watch them be successful and have their failures as well.

It also has helped me to want to create more dances

I used to think I was too busy and I didn’t do that many things. Now I want more dances and to get those, I need to take some chances in life. My dances were becoming too expected.  I was doing the same thing over and over.

I have been (and still am) afraid of change and failure. Failure would sometimes send me into a depression or mania.

I know I would have missed out on my own dances, including graduating from college, moving to another state, and being a teacher for 14 years. I have had the same best friends for the past 18 years and we have shared so many laughs, memories, and tears. Our family is very close, too. I would miss out on making those memories.

Now, I can see that my bipolar disorder is part of my dance.

I almost took my own life-the aftermath