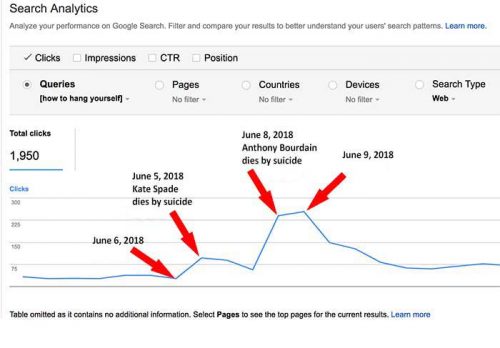 These are the statistics from when Kate Spade and Anthony Bourdain died by suicide. It shows the number of people who came to this page looking for a way to die when the news hit. And how all the hype and headlines trigger suicidal ideation for vulnerable individuals.

This emphasizes how important it is to clearly publish helpful resources on articles about suicide, particularly ones that pertain to famous individuals. And how we need to keep the method out of headlines.

Sensationalized headlines are more triggering. Articles that are more respectful and post resources inspire people to call and ask for help.

Many news outlets are still using the phrase “committed suicide” when the appropriate term is “died by suicide” or “killed himself/herself.”  You commit a crime. Suicide is not a crime but a public health issue. Saying “committed” implies crime and carries stigma that we are trying to overcome.

“Some [suicide] clusters may just be coincidence, and investigators have looked in vain for similarities or shared reasons. But one common thread is media coverage.

Researchers have found that highly publicized suicides can precede others, often by similar means, in the months that follow — in people already thinking about killing themselves.

The likelihood of this contagion appears to depend on the prominence of the coverage. In recent days, certainly, Ms. Spade’s death has been widely reported.

While contagion is not a factor in most suicides, Dr. Gould has written, the elevation of relative risk “given exposure to the suicide of one or more other persons may be quite great.”

—–Article Source, New York Times, Can one suicide lead to others?

Below are the countries in which this post is ranked. For over 100 countries, this post ranks on the first page of google. I do see in the statistics that people use the resources. I see them click the number for US resources, England or clicking through to the suicide resource page by country on wikipedia. 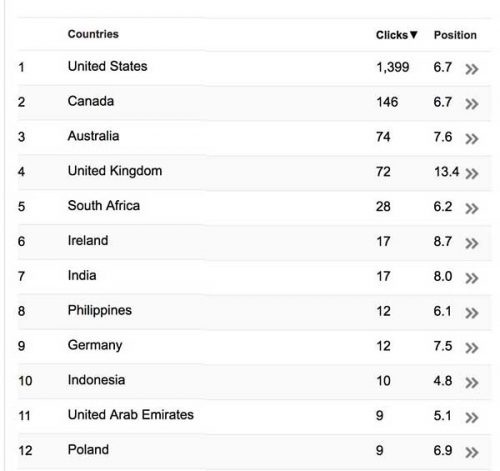 Here’s how the countries rank and the position on Google in each of the top countries. So the United States leads by far and the position is 6.7 on the first page of Google today. It was 6.2 the days the news broke on the two famous suicides.

The UK ranks lower, #13.2 on Google, but oddly enough it’s the highest click through rate of all the countries which means that more people click through to the page than visitors from any other country including the United States.

I’m not sure why that would be given that the page ranks much lower in Britain. But I wonder if it has to do with the particularly high suicide rate in Britain, particularly among men 20-49.

News of Chester Bennington’s death by hanging broke on the afternoon of July 20, 2017. Again, that bump in searches for ways to die by more than 174%.  See the comparison between two time frames below. 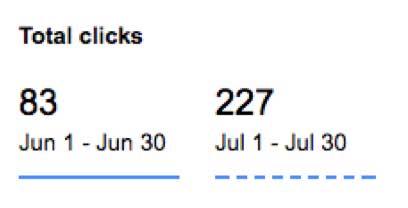 It’s crucial that if you are sharing an article, please share the ones that follow reporting guidelines, offer resources, and use the correct language.