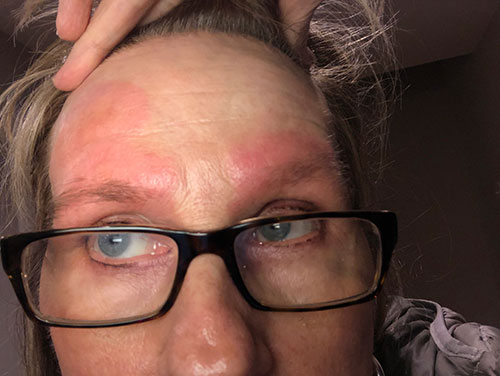 I got my mother’s day hives last week. With the help of Benadryl, it’s cleared up. Weird I get all these rashes during grieving season. And then they go away after the June fifth death anniversary. Poof! They vanish.

That first year, Mother’s Day hit me like a ton of bricks. That title expresses exactly how I felt. I felt bitter and resentment and I was pissed at the world. “Go on, go celebrate all your living children,” I wanted to scream.

The facilitator of my grief group had told us to plan things on days that would be hard–birthday and death anniversary, for example. I totally forgot about  Mother’s Day.

I got caught off guard that first year.

The next year was no piece of cake either. I dreaded it. I couldn’t even manage a card in the mail to my own mom.

It’s my third since Charles’ suicide.

I have come to realize I am still a mother even if one of my children is missing. I’m not jumping for joy or anything, but maybe I’ve gotten to a place where I can tolerate it. Even if I did get the itchy, hot hives a few days ago.

So no offense with the title.

But just know there are a lot of people out there that feel that way today. It might be their first Mother’s Day since losing a child. It might be someone’s first Mother’s Day since losing their mom. And then still others who’ve struggled to conceive and that day is simply a glaring reminder they can’t produce what seems so natural and easy for others.

Cherish the memories you have. Maybe it’s just a holiday to remind us to do that.

(opens in a new window/tab)