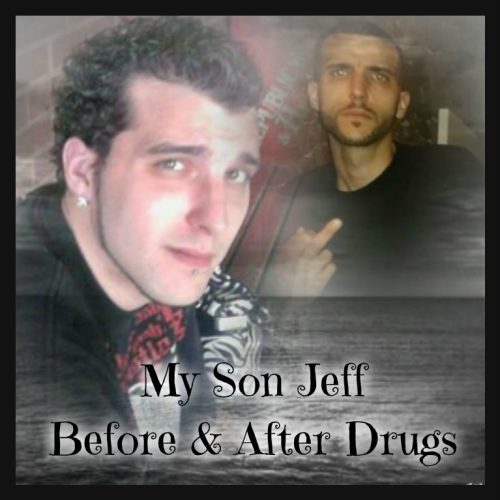 My son Jeffrey Scott Maurer II, Jethrow to most, struggled with depression and drug addiction for many years and lost his battle. I always thought I would get “the call” but I thought he would OD.

Never in a million years did I think he would kill himself when he just found out he was having a baby boy–one he had wanted for a long time. He told everyone he was gonna get off the drugs before Lucca came. He picked that name and was so proud.

Jeff was a great uncle and would have made a wonderful dad. He was 27. Two or three days after he found out the baby was a boy, he became delusional– thinking someone stole his drugs and drug dealers were going to kill him. He went to a friend’s house Sat October 8, 2016 and around 7pm their time, we are told he played Russian Roulette at their table. Someone in the house called 911 and someone else ran a couple doors down where my youngest son Jeremy was visiting.

We got the news in minutes.

The first call was “Mom, I think Jeff shot himself.”

I remember screaming and screaming for my oldest son Bobby who lives on my property. I waited for my son Sherman to come get me the next morning and took the twenty seven hour drive to Pennsylvania to see Jeff’s body and figure out what to do. Most people are not prepared for the death of a child and I was no different. I am in a wheelchair and on social security so money was a big concern.

Sherman, my mom, and Jeff’s best friend covered his cremation and public viewing of his ashes which with the urns which still cost $3500. His immediate family was allowed 40 minutes to see him before cremation. Walking out of that place was any mother’s worst nightmare and the hardest thing I have done in my entire life. I wanted, needed, to take him home with me more than I needed air to breathe. I got through the visitation and trip home–neither of which I remember.

But I was determined that his death would make a difference, so I started almost immediately upon my return to Texas,  joining graphic design groups for grieving parents in order to find someone willing to do suicide prevention graphics with Jeff’s pictures. Then I started sharing my phone number on Facebook, so anyone in distress could call me. Then I begged till someone showed me a graphic program so I could do graphic design myself.

I do free graphics for grieving people at least twelve hours a day when home. January 2017 was my first suicide prevention/awareness tour to meet with grieving families. I even met a woman and her daughter whose son Jesse had died by suicide in Pennsylvania just a few hours before Jeff’s death on that trip.

I was able to raise funds for two more trips in 2017. The last trip had me stopping in Pawley’s Island, South Carolina where I had designed a billboard for suicide prevention and I dedicated that billboard on October 12, 2017.

I then went to the Out of Darkness Walk on October 14, 2017,  spoke at The Father’s House Church in Pawley’s Island, South Carolina on October 15, 2017. Unfortunately, my old 1992 Ford wheelchair van broke down on that trip. Luckily I was able to get it repaired yet again and continue.

I continued doing free graphics on facebook  and on June 11, 2017 I started a support group for anyone who has lost someone to suicide or overdose. Shortly after I opened our website to hopefully reach more people.

Unfortunately after the trip in October, “Betsy” was declared non-road worthy by my family for long trips. So the search for a newer camper van, conversion van or wheelchair van in really good shape began.

We are asking folks that might have a good van they are not using to donate it to us. Or to donate to our van fund that we recently started. We figure if someone donates a van, we will use the money in the fund for suicide/drug/bullying awareness graphics to be put on the van as we plan on “her” being a mobile billboard.

I do not have to have a wheelchair lift as we could have mine put in the new van. I also do not need any special driving or seat modifications. I can transfer fine. And I am willing to fly to any state in the continental USA to pick one up.

I am Jeffrey’s Mom and that is why I speak.

If you know of someone who can donate a van for someone who is disabled (wheelchair bound), use this contact form and I will forward to Ms. Dawn Burton

If you want to donate to the fund, that is here 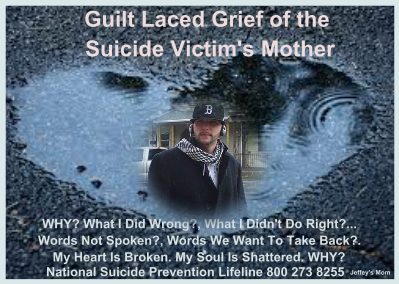 Why did he kill himself? Answering the why