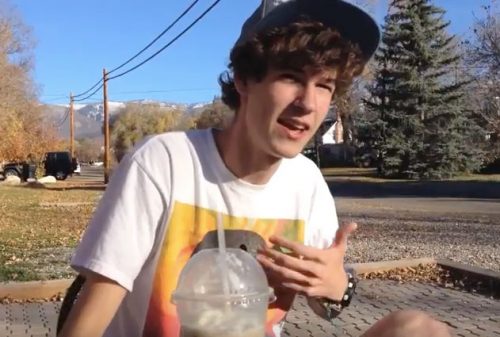 I’ve been writing a book and Charles will be my co-author since I will be publishing some of his lyrics–ones published and some not published. The point will be to show you inside the mind of someone who suffered from addiction, depression and thoughts of suicide. It offers such insight and understanding of the two diseases and a death by suicide. It answers a lot of the “Why?”

Today, I was trying to transcribe one of his YouTube videos. Originally, I submitted it to a company to transcribe it but they refused. I’m sure the mention of angels and devils and the curse words were the reason. They don’t get it perfect but it gives me something to start with.

He talks so fast I can’t catch some lines although I get most of them. When I listen to Charles, then someone else, I’m struck by how much faster he is, how much more intelligent and emotionally insightful his rap lyrics are.

So that I got it right, I decided to look through his notebooks to see if I had the written lyrics. I had not remembered seeing it and I didn’t find it.

When I open those notebooks, I am unable to  focus on looking for one title. I always get sucked into reading his writing. It’s just so amazing to see the depth of his creative genius.

What struck me today was how often he felt like ending his life. The depth of his depression. The frustration of his sleep disorder and how utterly worthless he felt as he became drug dependent and then addicted.

He suffered such feelings of abandonment and anger and he was far more aware that he was chasing a high he could never find again. Intellectually, he knew this disease inside out but could not write himself a solution. I never got into his phone, but these lyrics reveal a lot of things I didn’t know.

I will never paint a picture of Charles as the perfect kid. He wasn’t. Like many who suffer addiction, he did sell drugs to support his habit.  That was not who he was or who he was meant to be and he felt intense shame for it. He writes about how he has wasted his life. When we lecture, we tend to think they don’t know all this. And they do.

I also felt something else. I didn’t blame myself today. The sheer volume of despair in those lyrics made me feel like I couldn’t have possibly fixed this. I also realized what someone in recovery has to go through to find themselves again. So many layers of pain and so much work to do. I read about rehab and felt his withdrawal and I had a new respect for those who have found recovery. Now I see why family and love and support are so important. What it takes to drag yourself out of that level of despair.

The amazing thing is how many do survive and find recovery.

Ultimately, I didn’t find the original lyrics and there were just phrases I could not understand due to my being a middle aged mom. So I decided to reach out to his friend Max, a talented friend of Charles who did the beats to many of his songs. I sent the lyrics his way to help me with some of the lines I missed or got wrong.  That was a great move and he was able to translate and shed light on what I was missing.

I got it done! The most important one.

12 thoughts on “So much hurt in his lyrics”