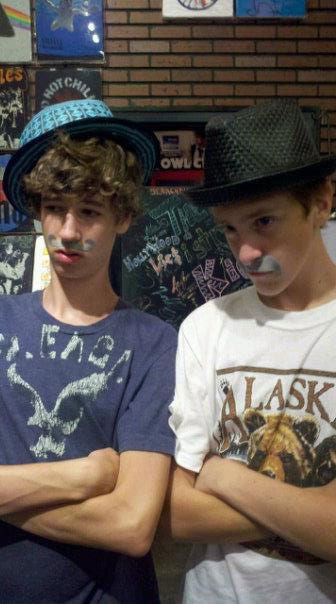 He owned an audience. Held it in his hands. He may have suffered anxiety but he was never anxious on stage. Ever. He connected with an audience and you knew he had something the moment he walked on stage.

During the play Hairspray, he apparently hid in the dumpster on stage. Naked. Everyone struggling to stay in character as he rolled around in that thing stark naked. That same night, he apparently hid behind the bar in his underwear stroking people legs. I didn’t know this at the time. Charles loved his gags, always spectacular and unexpected.

It was when he stopped fully investing himself in theatre that I realized something was really wrong. His depression got worse and I imagine his suicidal ideation did, too. And with that, his drug use increased.

He did embrace theatre again at boarding school in Utah– winning an award for best character actor and for a stand-up monologue.  He had such a good time that weekend. I remember the call and the ache that I didn’t know in time to take a plane and see him perform. Had I known, I would have gone. But Charles never told me anything ahead of time. He lived in the moment only, rarely looking behind him or in front.

Once he graduated from boarding school, he participated in theatre at John Tyler. But I think his drug use had escalated in September 2014 and it was like I was seeing a fire die out. What I so loved about Charles, his gift of timing, his love of stage and how he shined on it started to whither away. I miss his performances–the ones on stage, the ones in my house for youtube videos, the little impromptu sketches he did at home to make me laugh.

To Charles: Letter to a Fellow Goon – by Jay Skinner

2 thoughts on “Charles loved the stage. And the stage loved him.”