So four of us are setting up at the Out of the Darkness walk hosted by AFSP, American Foundation of Suicide Prevention. I look over and see a group from the McShin Foundation putting up the display you see featured here on this page. They, of course, had permission to erect the display and I was glad to see recognition of the link between suicide and addiction. McShin has recovery programs and housing for 18+ and just started a Recovery School, McShin Academy, at St. Joseph’s Villa.

It takes about four or five people 2.5 hours to set it up. But once it’s done– wow.

So for the rest of the day we’re at Deer Run putting out tables and erecting tents and people are biking down the path, stopping, getting off their bikes and staring at this display.

Then they ask us what we’re setting up for. And we tell them about the Out of the Darkness walk scheduled for the next day.

All day this happens. People walking their dogs, riding their bikes, running. They stop. They stare. It’s so many. Too many. The display makes a bold statement of how many die from drug related illness every year in Virginia. They say 1,400 died from overdoses in 2016.  But overdose is underreported since not all counties have to report it. And then there are other drug related deaths not included in that total.

My son killed himself while going through withdrawal from heroin and finally the two causes he is associated with have had a merger of sorts. People are recognizing the connection and talking about it. I strongly believe we need to treat mental illness and addiction together in order to prevent early death.

At the walk, there was a lot of buzz about the display then, too. And after I walked up and asked if I could add my son’s name to one of the crosses. It felt good to acknowledge and remember my son, Charles. All those lost lives, they matter. Every one of them. 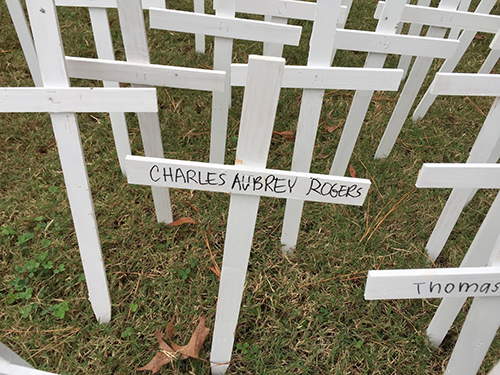 3 thoughts on “The display that stopped traffic”