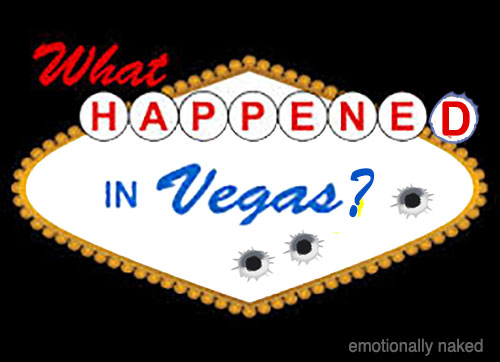 What happened in Vegas affected all of us. Worst of all, 58+ families from the US are dealing with the worst possible news. Hundreds more are recovering from stampede injuries and assault weapon wounds.

I thought about the famous advertising line today, “What happens in Vegas, stays in Vegas” and the kind of culture that creates–one that’s ideal for an unassuming retired accountant to turn into the deadliest mass shooter in US history. The perfect place to formulate a deadly plan where no one would ask questions.

I don’t know that the 64-year-old man, Stephen Paddock, who opened fire on thousands of concert goers in Las Vegas was mentally ill. But I can guess that he probably was.

He was a senior citizen with a girlfriend, lived in a retirement home and had a criminal history of one traffic citation. Yet he waltzed in a hotel with reportedly ten weapons stuffed in a duffel bag and had a hotel room full of ammunition and even more guns. That’s beyond surreal.

He also had surveillance cameras in the hall. I guess he had no maid service the days he stayed there. Did he halt the service or hang a “do not disturb”sign on his door handle? Did no one find this weird? Is it typical for someone to go a week without maid service? Maybe not.

A senior citizen carries in hundreds of pounds of guns and ammo and no one notices? All of this is too sad. Too bizarre.

Sometimes those with depression are not sad, but very angry. This is often typical of males. How many others are like him? Angry people suffering and quietly stockpiling weapons of mass destruction ready to spray bullets on unsuspecting festival goers, paraders, concert goers, school children. It’s like we have our own US brand of loner terrorist.

Suicide is often hard to predict. As are mass shootings. But someone saw something. Probably many people noticed odd things and didn’t speak up. Dismissed behavior that was clearly different than the past. Or maybe they did report it and no one acted on it. If the guy is gambling and spending loads of money, maybe bizarre behavior is accepted.

What I’m saying is that we need to pay more attention to what’s happening around us. Get our heads out of our silos and join the human race. Incidents like this has become way too normalized in our culture.

I’m so sorry for all the loved ones of the victims that died and those struggling with wounds and PTSD now. What unimaginable horror.

As much of a suicide prevention advocate as I am, in this case, I don’t think I am sorry it was not prevented.

To Orlando with Love – #griefheart number 65