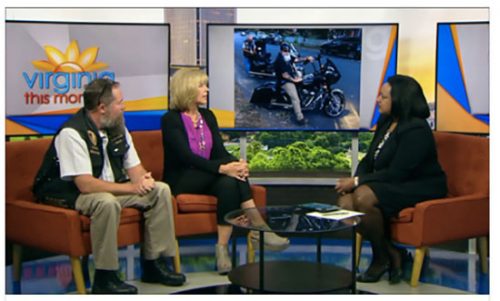 Ned Morris and I appeared on WTVR Virginia This Morning to Talk about the Poker Run in Richmond, VA to raise money for suicide prevention for youth in Virginia.

Register for Ride to Stop Suicide

Who: The Regulators Chapter of the Pipe Hitters Union Motorcycle Club is proud to host the ‘Ride to Stop Suicide’ on Saturday, September 23, 2017 to benefit Beacon Tree Foundation, advocates for youth mental health.

The Ride: The motorcycle ride is roughly 75-miles and incorporates several stops within the local area. It will start and end at Capital Ale House in Midlothian.

The Time: Walk up registration will start at 8am with rides going out between 9-10:30am. All rides must be in by 2:30pm. Prizes will be given for best and worst hand along with door and raffle prizes.

The Cause: Recently, our community has suffered multiple youth suicides. To curb this alarming trend, proceeds of this fundraiser will go to Beacon Tree Foundation, an organization that advocates for youth up to age 21 who struggle with mental illness, suicidal thoughts and co-occurring addiction disorders. Early intervention has shown to benefit children and help them learn to manage their illness, avoid completed suicide and lead productive lives.

Children of veterans do suffer a higher risk of suicide than civilian populations of the same age. It’s important that we talk openly about suicide as studies have shown that it does not “give someone the idea” but instead encourages those suffering to seek help.