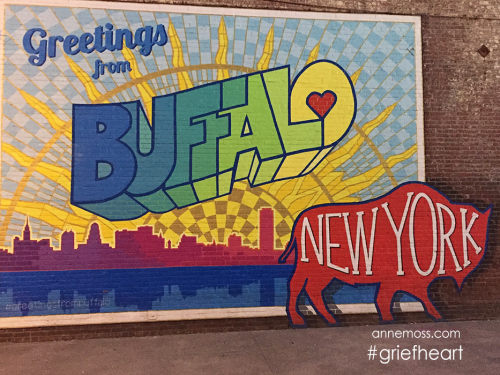 Went to Buffalo, NY for a recent brain radiation surgery and on the way to the hospital, I spotted this. I found out Buffalo was the home of the famous chicken wings. Buffalo Wild Wings was Charles’ gourmet restaurant. Randy went to the original Buffalo wing restaurant while I was being carted off to surgery. (I am not a fan of wings.) But Randy always has been as was Charles.

Going to this city I felt my “invisibility” evaporate, the subject of a future blog post as I sort out it’s meaning in my own mind.

But just knowing how Charles would have gone to every wing restaurant to compare the wing quality and all the sauces made me smile. People were so nice in that town. I can see him now striking up a conversation with everyone he ran into.

A creative genius slipped through my fingers