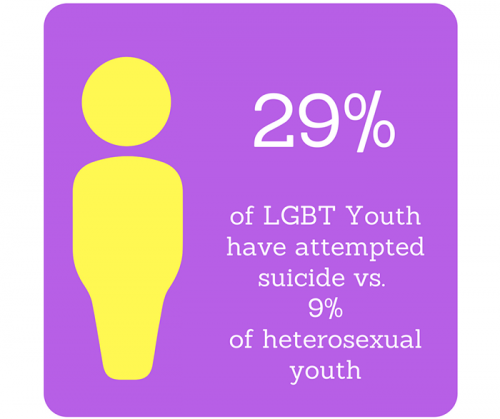 Suicide among the LGBT community, especially among the youth, is a topic I believe deserves more attention than it has received. According to the National Action Alliance for Suicide Prevention, there isn’t official national data in America for the rates of suicide among the LGBT community. One reason being there isn’t an accurate percentage of the population who identifies as LGBT. The other reason being that particular information isn’t included with the release of a death certificate.

Researchers from various institutions, such as the American Journal of Public Health, have found despite the lack of national average data that suicidal ideation, attempts, and deaths are higher among the LGBT community than the general population. The CDC reports that nearly one-third (29%) of LGBT youth had attempted suicide at least once in the prior year compared to 6% of heterosexual youth.

There are a multitude of reasons for this including social stigmas, family rejection, bullying, abuse, as well as institutionalized homophobia. The research results are unacceptable.

What it all boils down to is everyone should be accepted and loved as a living breathing human being. Everyone should be treated as a person with thoughts, feelings, and desires. Despite what that individual identifies with, they are still human. To judge someone simply because of their sexuality or the gender they identify with, is harmful.

From my own experiences and from hearing others stories, what inspires the downward spiral to suicidal ideation is feelings of worthlessness. The feeling of being unaccepted by not only society, but especially by the ones you feel should love you unconditionally, takes a heavy toll on an individual’s mental health.

These constant mental stressors, especially those genetically predisposed to mental illness, can unfortunately lead someone to suicide. That feeling of worthlessness created by social stigmas has been proven to deter individuals from receiving the help they desperately need.

I truly believe that to not only end the stigma of suicide but help those who suffer, is through love and compassion. We must come together no matter your ethnicity, sexuality, gender identity, religion, or socioeconomic status. We all must realize that through all the labels we place on ourselves that we are all human.

At the end of the day we all just want to be loved and accepted for who we are. What makes us all human, what connects every single one of us to another is love.

10 things I learned from Charles

One thought on “LGBT Community and Suicide”