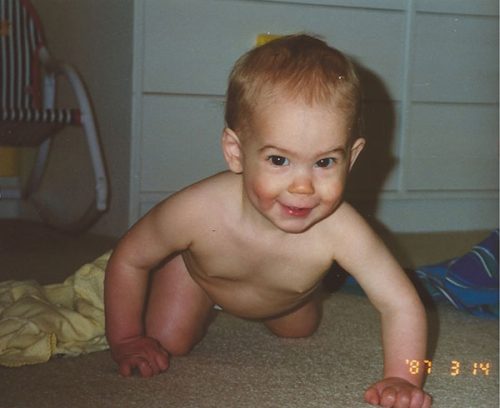 While I personally have not ever felt suicidal, I have felt pregnancy depression and postpartum depression. I would tell you if I had ever felt like killing myself. I am, after all, emotionally naked.

It was only after watching the news segment about Allison Goldstein’s suicide after moving to another coast– away from her family–that this memory came back. When I saw the segment on TV, they didn’t emphasize the move but I knew it had to be a big contributor to her suicide. Because I felt intense postpartum depression once we moved from family and my support network at a vulnerable transition time in my life.

In my case, I was depressed throughout my entire pregnancy with Charles, my second child, and I had morning sickness the entire time. I had never had depression before so I didn’t realize it until after he was born,

Once I went into labor and they said ‘push’ and Charles was born, the dark clouds lifted—just like that. I even remember the visual in my head of seeing sun and blue sky. The relief was absolutely euphoric and immediate.

When I got the baby blues about a week later, I laughed. It was nothing compared to the depression I felt pregnant.

So fast forward about 6 months and my husband gets a promotion.

The bad news is we have to move to Richmond. I loved Richmond and had lived there right after college but my family and Randy’s brother were in North Carolina. I was an hour from my parents and thirty minutes from Reid and Kim. I had friends and a strong support network including all the parents we went through pregnancy with.

In addition, I had a good freelance business going with some stellar clients that I had worked hard to acquire. I had babysitters I could hire from a nearby women’s college and a babysitting co-op. I was a stay at home mom slash freelance copywriter/writer. That means I wrote advertising. It had taken years to build those relationships and I was finally getting some good projects.

Moving meant leaving all of that behind

I didn’t want to go, particularly with a 2-year-old and a 9-month-old.

We ended up moving and I didn’t adjust well or quickly. My husband had an instant connection with people at work. I had nothing. We moved in the dead of winter, I was suffering from pneumonia and I was overwhelmed and alone with two young children.

We moved to a new neighborhood and not all the houses were built yet. It was very very cold that winter. No preschool, too cold to go outside and I was in the dark about what activities there were for children. No social media at that point and internet was pretty limited in 1996. Out where we were there were no babysitters, no cable yet and no internet (I had an internet connection in 1995 in NC).

My entire support system was gone. No friends. No family. And although I don’t suffer from depression normally, I cried myself to sleep every night.

While I am not predisposed to suicide, I can understand how a move during this fragile transition in one’s life could inspire suicidal thoughts in someone who is.

Summer came that year and the kids adamantly refused to get in the pool. By this time, I was desperately lonely having spent 6 months by myself with no support at all other than Randy who is a great guy and a wonderful Dad. But I missed having friends and clients.

The pool was my only chance to meet others and I remember trying to encourage Richard, then 3, to get out from under the lounge chair and go in the pool with me. He would not budge, sweating profusely under the chair and making me feel like the worst parent. Meanwhile, Charles is not quite walking yet and because big brother wasn’t going in, he screamed every time we got near the water.

I remember sitting in the lounge chair with my dark glasses crying. I then decided to find a babysitter.

I found one. But since Charles had not been separated from me at all in 6 months, he didn’t adjust quickly. So on day number two the babysitter takes a video of him crying and shows it to me.

I asked her how he did after about 10 minutes and she said he had adjusted. She then proceeded to make me feel like a horrible mother because I had the audacity to walk out when my child was crying. She was history.

During this phase my life, a support network and friends were the most important thing in the world to me.

I think it’s important for people to be aware of that because a move at this point could trigger a postpartum suicide. In fact, suicide is more common during times of transition.

6 thoughts on “Postpartum depression and suicide”