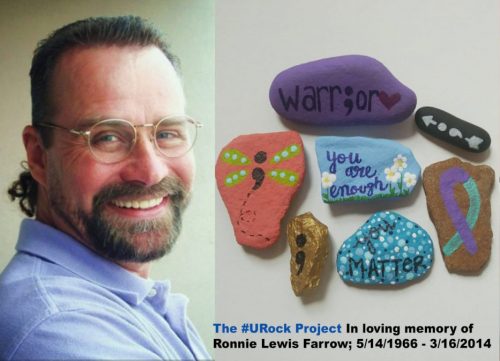 My now wife and I had just started dating when I texted to tell her that we wouldn’t talk for a few days. I’m sure it put her on edge, but her response was she hoped everything was okay and that she was there if I needed anything.

As I drove around in my car alone, I felt the pain and emptiness crawl up from within me. I pulled over and texted her to ask if I could call because I needed someone to talk to. When she answered the phone, I anxiously began to tell her that my Dad, Ronnie, had struggled with drinking and suicidal thoughts for as long as I could remember. I hesitantly told her that he had lost his battle.

There had been times when my Dad would call my family from a hotel room to say goodbye and that he had a gun. The hardest was when my Dad drove his truck into a field, called his wife to say goodbye, and tried to overdose on prescription medications.

I remember telling him at the hospital that night he needed to get help. No matter what situation took place, each time he always came back home. I expected this to be one of those times when I received the call, but none the less I rushed to my Dad’s apartment, expecting to find him sleeping.

That was not the case; not this time

Instead I walked in to find traces of the remains of the man, who not only gave me life but raised me and my younger brother as a single Dad after we lost our mom to esophageal cancer in our early childhood. I will never forget the vision of crimson painfully splashed onto an unforgiving canvas of white.

I have, and never will, see a more torturous color than the one God used to create life.

All of my life, I remember struggling with what I thought was anxiety and depression. After the loss of my Dad, those feelings were amped up to the point that I decided to seek help from a doctor.

The doctor I saw kind of wrote it off as every day depression because of my loss, but the doctor handed me a prescription anyway. A single piece of paper that led me into a downward spiral.

The first few days were okay, but I could tell something was off.

I returned to the same doctor. When I told the doctor my symptoms he told me to stop that medicine and immediately started me on another one. This cycle happened one more time before I completely fell apart.

I locked myself in my apartment, stopped answering calls or texts and even my door. What I struggled with in that time period was a decision that would decide the outcome of the rest of my life.

The final conversation I had with my Dad was an argument

At the end of the argument, he told me what he had planned to do. My response to him was “Why do you say things like that?” I became so overwhelmed and angry I hung up the phone.

That was the last time I ever spoke to my Dad.

Later that night, my Dad texted me to ask if I was OK. I was still angry and ignored the text; it’s a decision that still haunts me to this day. The next morning I received that crushing phone call. I was devastated; I felt guilty, I felt like I should have done more.

All I could think about is how he told me what his plan was and I did nothing. I kept thinking that it was my fault because I didn’t even respond to his last text.

While sitting in my kitchen, I decided to get my gun from my bedroom closet. I then opened my gun case, grabbed the handle grip, and sat on my bed while looking at the silver color of the barrel gleaming in the sunlight peering through the window. It was almost as if it were beckoning me.

As I sat there and contemplated my decision, a small voice told me no. This was not the end of my story.

I put my gun down, shut the top of my gun case, and stored it back in the closest. The very next day, I went to a gun store and sold it. I didn’t want the temptation any where near me.

From that point on, I was determined to figure out what was going on with me. After many years of trying, I finally found a doctor that took me seriously. With multiple tests, I was officially diagnosed with Bipolar Disorder.

The road to finally being diagnosed was paved with pot holes, speed bumps, and rough terrain. I finally had a reason for why my entire life felt like I was caught in a storm with unpredictable winds. I still believe that even though he is no longer with me that my Dad got me to where I am today.

Last year, in October of 2016, my wife and I participated in the American Foundation for Suicide Prevention’s “Out of the Darkness” walk in loving memory of my Dad, but also to recognize the struggle I have faced in the last few years. It was no question that this walk would be something we participate in every year.

Since the walk in 2016, we have been doing everything we can to help spread awareness and end the stigma attached to mental health.

My wife had a great idea after opening an Etsy shop where she sells hand-painted canvases. Together we came up with a canvas in memory of my Dad that includes a semicolon as well as a reminder that you are worth it.

Half the proceeds from every canvas sale are donated straight to the AFSP. It just didn’t seem like enough; what else could we do to reach more people affected by suicide?

We immediately registered for the walk again this year, however, we plan to do it a little differently. We were recently introduced to a group called “RVARocks!” where people paint rocks and hide them for other’s to find.

Since we started painting, my wife has always included a semicolon rock complete with the suicide prevention hotline on the back, inspired by both my Dad and my own struggles. Mental illness is an invisible illness, you never know who may be struggling, and may need just a glimmer of hope that they aren’t invisible.

One day my wife asked me what I thought about her painting as many rocks as she could to take to the walk with us this year. We decided that rocks will include semicolons as well as rocks with inspirational messages on them.

Not only those struggling with suicidal thoughts, but those who have survived attempts as well as families and friends directly impacted after the suicide of a loved one.

If our rocks even make one person smile, then we consider it a huge success! Anyone who finds them and are touched by their message are more than welcome to take them home to keep.

To everyone out there fighting the stigma of mental illness or adjusting to life after a loss to suicide, we are here to tell you that you are a warrior.

You have overcome so much in your life. Just getting out of bed some mornings is a victory in itself. Some people will fail to see just how special you are; those people are not worth your time.

Just because you have a mental illness does not mean you are broken; the world is. You are a beautiful phoenix: some days you will crash and burn, but you will always return to spread your wings and rise above.

Never stop fighting because you are worth it! 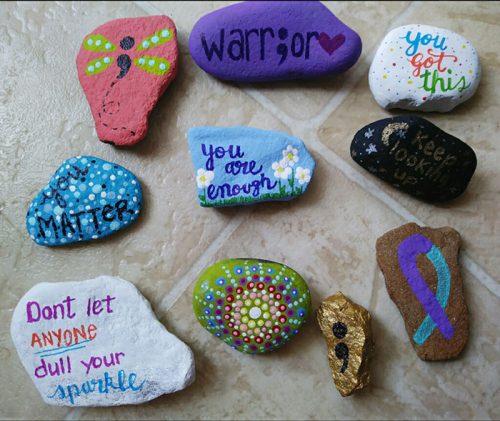 5 thoughts on “Honoring Ronnie Lewis Farrow with ‘The #URockProject’”