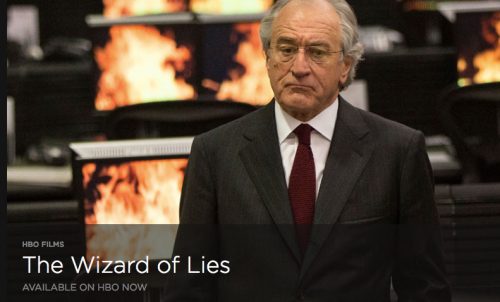 I recently saw the HBO special, Wizard of Lies–the story about Bernie Madoff’s Ponzi scheme. It’s a HBO movie based on true facts.

I had some thoughts on Mark Madoff’s suicide as well as what drove Bernie Madoff to commit the 65 billion dollar fraud of the century.

Any time there is a scandal, the media go into full throttle feeding frenzy. The national media has become ratings whores. It gives them permission to sensationalize, and to go on air without having all the facts right. (Gone are the days of Walter Cronkite.)

Living through that would be brutal and relentless especially if it went on for years which it did in this case. Of course there are all the victims who lost their life savings, whose lives were also permanently affected. In fact, there were a number of suicides as it related to the loss of life savings and the humiliation of succumbing to a major league scam.

As far as Mark Madoff, the public saw an entitled rich kid who lived, whether knowingly or unknowingly, a privileged lifestyle. According to his widow, he was an emotionally sensitive person upended by his father’s fraud scheme. I see a sad ending to a life while kids and a wife are cheated out of husband and father. I think it was the press, the public, his father’s fraud and probably being predisposed to depression that caused Mark’s suicide. Studies do show that suicide is the result of a perfect storm–multiple factors including environment, health and family history.

Ruth Madoff was also slaughtered in the media before all the facts came to light. I feel she was a victim, too. What struck me, though, was the lack of support she got after the loss of her son to suicide. How painful it would be to lose one child to suicide and another to cancer later on. She lost everything–her lifestyle, her two sons and her husband.

Her life was just as much changed as those who lost millions of dollars.

At first, I thought, like a lot of people, he might be a sociopath. It could be but here’s what I think.

He was already a man with millions with a successful business when he started the Ponzi scheme in the 90s. He stated, “It was never about the money.” I believe him.

Then what was it about?

I think it was the excitement. The game. The thrill of victory was his “fix.” I think he was a sensation seeker with a “broken reward system.”

In short, Bernie Madoff suffered from an addiction–an addiction to the excitement of his massive fraud scheme.  Throw in a co-morbid personality disorder called narcissism on top of that.

Sensation seeking is one of the traits that has been identified as predisposing someone to addiction.

Like someone with substance use disorder, he minimized and justified his actions.

He manipulated and stole.

And he could never get enough.

I think this family and its fraud victims were torn apart by an narcissist with an addiction.