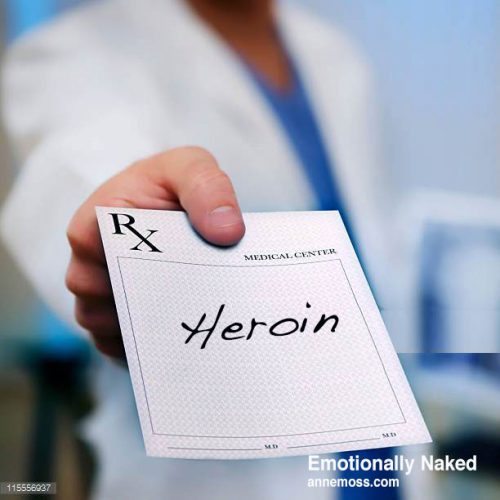 Drugs like Oxycontin, Vicodin, Dilaudid, Tramdol, Percocet are heroin. They are all opiates. Just because it comes to you on a prescription pad makes it no less dangerous than heroin.

It starts with a prescription for pain from a surgery, people become addicted and then they turn to the much more dangerous, unregulated street heroin laced with any multitude of dangerous drugs and fillers.

But what if we did prescribe it?

Those suffering from substance use disorder would then come get their supply once a week from a healthcare provider and then at least it would be clean of things like Carfentanyl (elephant sedative), fentanyl, benzodiazepines and whatever deadly substances it comes cut with.

“Today, Portuguese authorities don’t arrest anyone found holding what’s considered less than a 10-day supply of an illicit drug — a gram of heroin, ecstasy, or amphetamine, two grams of cocaine, or 25 grams of cannabis. Instead, drug offenders receive a citation and are ordered to appear before ‘dissuasion panels’ made up of legal, social, and psychological experts. Most cases are simply suspended. Individuals who repeatedly come before the panels may be prescribed treatment, ranging from motivational counseling to opiate substitution therapy.” (Vice News)

This could go one step further

Truly prescribing it. Hear me out.

What if those who were addicted came in contact with a healthcare worker once a week to get clean needles and their supply of generic heroin for the week. Like those who get insulin.

Putting people in front of healthcare professionals that treat them like they had a disease with opportunities to go into recovery on each prescription refill would help us slow the epidemic and get more people into recovery.

Relapse rates are very high for opiate use

Part of the reason is how it effects the brain.

I think the other reason is the lack of support in our culture.

The stigma, lack of mental health resources and our criminal justice system make it difficult for those addicted to feel supported, get long-term help and be successful in recovery.

Once you decriminalize or make it legal by prescription to supply those with the illness with a safe drug instead of a street drug, you take the financial incentive out of the equation which would collapse the drug trade. Making a legalized version of generic heroin that costs what the illegal version costs and you start to see less drug-related violence in poverty areas. Not to mention the cost of warehousing those with disease in our prisons and jails.

Bring the illness into the healthcare community where we treat other chronic diseases. I do believe we should still follow strict prescribing guidelines for those going through surgery. We don’t need to create any new sufferers of addiction.

We have handed out these drugs like candy and then we turn our backs when people become addicted. We treat those with substance use disorder like criminals when they have to turn to street drugs because they cannot afford prescribed drugs. How is that right? Why not treat this like any other chronic disease?

At the very least, we could at least copy and pilot Portugal’s proven model of success in reducing drug-related deaths.

Your thoughts? Go ahead and punch holes in the idea!

PSA along these same lines.

How heroin talked to Charles

6 thoughts on “If it were called heroin, would a doctor prescribe it?”