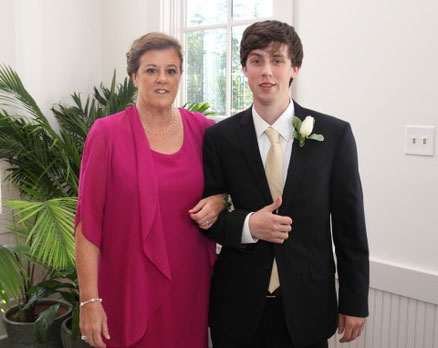 My son Dawson, my first child, was born February 13, 1988. He was such a happy baby and he grew up in the Wyndham area of Short Pump. He loved school, his friends, his pets and his family–especially his cousin Grayson.

Dawson played little league baseball, YMCA basketball, travel soccer with Richmond Strikers, and he was a brown belt in Karate. He later played Lacrosse, and tennis and golf through High school. Dawson did well in school and was accepted into Deep Run’s Center for Information Technology, his home school and where his friends were.

When the young JMU graduate who was the Director of the Center left the program after 2 years, Dawson was devastated and wanted out of the program. We felt like Dawson should follow through with his decision. He had made National Honor Society and was recognized for, believe it or not, hacking into the Deep Run Henrico school computer system which was a challenge assignment by the Center teachers. This won him an Apple prize and also a promise of a career in software.

But Dawson was not happy in the center and pleaded over and over again to drop it–a big “what if” looking back. Dawson began smoking pot regularly (we think) and experimenting with other drugs. He graduated and was accepted to all three colleges he applied to.

Dawson decided to attend JMU to study Sports Management and he experimented with drinking, drugs, and following a music band with Grateful Dead-like groupies. He had the requisite poor grades that accompanies this lifestyle, but Dawson was maintaining and getting by. On his 20th birthday we surprised him with a rescue puppy, Burly, and Dawson seemed happy. At least for a while.

Dawson found love and between Burly and his girlfriend and all seemed right with the world until April 2010 when he and his girlfriend Peyton were the victims of a home invasion in his off-campus apartment. Three masked, armed gunmen broke in.

Peyton found an opportunity to call police and the masked men fled with a laptop computer and $7. Dawson was left bleeding with a gaping head wound, a result of the butt of a handgun, and severe ongoing back pain from being beaten with a billy club. But he was left with more than that.

Dawson left Harrisonburg in April 27, 2010 a changed person. He would never return to JMU’s campus again. It was only through hard work and determination and finding a professor that would work with us that Dawson earned his college degree in December 2012.  Dawson had become somewhat paranoid and introverted.

He and Peyton were on again off again and he really was using drugs and pain pills to just to try and feel and “act” normal, and maybe not feel to so uncomfortable in his own skin.

Dawson worked a variety of part time jobs over the past 4-5 years of his life mostly in the food service industry. We knew Dawson was sad, lonely and dejected and had lost friends and Peyton due to his drug use.

He moved home and struggled. We got him into an intensive outpatient program (IOP) in Richmond but Dawson never embraced it. He did not get a sponsor or attend meetings, he just went daily to pick up suboxone which was just substituting one drug for another but considered a treatment for Substance Use Disorder.

We stopped this treatment when Dawson refused to adopt the behavioral contract for the program. Another “what-if.”

The police were regulars at our door. Dawson had spent a night or two in jail, unbeknownst to us, but for the most part escaped any consequences for his behavior. He did get arrested for a DUI in late 2013 as he had nodded out on heroin in a parked car, basically overdosed. Dawson was then 25 so we were not notified when these issues happened.

We only see what we see at home, a withdrawn, skinny sullen unhappy kid with no social life. It was heartbreaking.

We tried tough love, we tried to get him into rehabs, we tried all we could at the time but looking back it was so shortsighted and so NOT ENOUGH.

Dawson overdosed at work on January 27, 2014 and we took him to St. Mary’s. He was in a locked ward for 5 days and we got him into an inpatient Rehab Facility in Lynchburg, VA where he stayed until February 26th when he celebrated his 26th birthday and aged out of our insurance policy.

We were the guarantors of his treatment and would have paid anything to keep in under treatment. However, the Rehab facility said to us that he was ready to go, he was climbing the walls and not only that he was so smart he could teach the coursework at the rehab.

Really? Well guess what. Addicts are smart and manipulative. Dawson was not ready to come home by a long shot. I had worked with the Affordable Care Act Exchange and had gotten Dawson coverage beginning March 3, 2014.

Dawson would not live to see that date.

He came home so sick, so helpless, we did not know what to do. He went to an NA meeting Wednesday night and Thursday I had what would be my last full day with Dawson. We spent all day running errands together and had a family dinner Thursday night after Dawson’s NA meeting.

We had some smiles and laughs but it was cold and windy and Dawson didn’t feel well.

Dawson wanted to go to a different NA meeting on Friday night where we think he scored score drugs.

He woke up unusually animated Saturday morning and said he had reconnected with a JMU ‘girl’ friend at the meeting the night before. He said she had just relocated back from Florida and was 8 months into her own recovery and he wanted us to give him a ride downtown to meet her and her father at Lowe’s.

Because of his energy level and his excitement, I made Dawson strip down to his boxers and checked him for anything. It was such a change from the night before.

The only thing that proved true about that story was that Dawson had seen the girl at NA the night before but when we contacted her later she said they just said hi to each other and there were no plans to meet.

Then the doorbell rang. Two Richmond City police detectives arrived at our house at 6pm on Saturday March 1, 2014 and said Dawson had died of an accidental heroin overdose in the bathroom at Kroger on Lombardy, just next to where we dropped him off for his “lunch date” earlier.

The Detectives were business-like, dispassionate, and detached.  They were tired and annoyed by this burgeoning epidemic. In the 3 years since Dawson’s death, I have seen a change and law enforcement is no longer trying to arrest their way out of this epidemic but help those with substance use disorder.

We are finally recognizing addiction as a disease. It just took 65,000 lives over the the past 3 years to get here. Jails have drug treatment programs and are working with addicts in recovery and there are many successful programs in our community- HARP-(Heroin Addiction Recovery Program in Chesterfield County Jails, a nationally-recognized program with Sheriff Carl Leonard)

All I can tell you at over 3 years and 3 months later that receiving this news is like getting blindsided, run over by a freight train and hit in the stomach with a 2 x 4.

It is the most physical pain I have ever experienced in my life and I miss Dawson more today than I did on March 1, 2014. I miss his smile, his laugh, his sense of humor, his crazy vocabulary and his nicknames for everybody and everything. But mostly I miss his whole lotta lost potential.

There are so many coulda, woulda, shoulda’s associated with deaths by substance use and suicide. It is gut-wrenching and at times completely paralyzing.

My husband says that hindsight is one of the ugliest words in the English language. It only gets a bit more bearable with time.

I have been involved non stop with two specific organizations JHWFoundation, which centers on Collegiate Recovery and funds RAMS in Recovery at VCU, and SAFE (Substance Abuse Free Environment) and I proudly serve on both of those boards.

I have raised money for the Travis Pearce Foundation, JHW and SAFE and have supported and donated to the work of BACON STREET, Beacon Tree, Facing Addiction, McShin Foundation, GRAPLE (a grief group at McShin), the Virginia Recovery Foundation angel initiative and the new Political Action Committee ARPAC.

I attend every lecture, seminar, web-conference, and coalition meeting to learn, educate myself and to help spread the word. And more importantly, to tell Dawson’s story every chance I can!

All I can hope for is to reach and help just ONE PERSON which will make Dawson’s life have meaning.