From Anne Moss: If someone tells you something about suicide, please take it seriously. Do not keep it “secret.” This is not to shed blame. We all overlook signs of suicide. What I’m asking you to do is to pay attention and be there. Make the call and warn a mom, a friend, a relative.

I met Neico  Hayden (pronounced NEEKO) at the James River Out of the Darkness walk in May 2017. I saw him and his family in the parking lot and walked over to them. I had no idea he was a recent suicide survivor until his mother told me his story. Chilling. Hopeful. Thankful. The roller coaster of emotions.

Neico was standing when I spoke with him. He listened to my story about Charles, hugged me and said it was a hug from my son. He was crying and so was I. Then he told me something that amazed me, “I’m so glad to be alive.”

It all began on Sunday, December 18th 2016, the day our lives were forever changed. Neico, being a typical 17-year-old, wanted to experiment with alcohol. I was opposed completely to him doing so with his friends and I felt he would be safer at home where I could keep an eye on him.

I allowed Neico to drink some wine and he also took a Bahama Mama that I had intended for myself but as I am not a drinker, so I decided to not drink it after all.

I went to bed around 10 pm and Neico was fine– he was laughing and being silly and I assumed all was good.

However about 11:30pm, my boyfriend came home from a music gig and woke me up saying there was a weird sound coming from Neico’s room and his door was locked. As we proceeded to open the door I was not prepared for the horror of what I found. There on the floor was Neico with a gaping wound to his face– my worst nightmare. He had shot himself in the face with a shotgun.

As paramedics and police arrived within minutes, we were told they were bringing him to Chippenham as it was the closest trauma center outside of VCU. Once there, he was given 5 blood transfusions and the trauma surgeon performed immediate surgery to try and stop the bleeding.

Six hours later the neurosurgeon came out to get us and tell us he had survived the surgery and they were prepping him to be airlifted to VCU health in the STICU. He asked if we wanted to see him before. I was not prepared for what I was about to see.

He looked like a giant Q-tip with a hose coming out of his mouth. He was hooked up to several machines. All very frightening.

Once he was at VCU, the Doctors there gave Neico less than 1% survival rate. They told us IF he survived, he would probably never walk, talk, eat or breathe with a trachea.

Preparing for the worst

They said he would have no cognitive abilities and would never make decisions or have a filter–that was all best case scenario. Most likely, we would have to make a decision within the next week or so about his life. His kidneys were failing, his liver was failing and he required three blood pressure medicines to keep him alive and he was on a ventilator.

I asked them have they met my God? They looked at me like I was crazy.  I said well I thank you for all you are doing but God has the final say and I don’t believe God is ready for him.

Again they looked at me crazy and said you can believe whatever you like but we are telling you medically how it is.

That night my daughter laid across Neico and cried and pleaded and poured her heart out. We never left his side.

Two days later, he was down to one blood pressure med, about 70% breathing on his own and his liver and kidneys were starting to rebound.

Over the course of the next week, they discovered five aneurysms in his face and his CT scan showed he had suffered a stroke on his left side of the brain.

Again they had no hope, but I did anyway

God did, and his prayer chain was in almost every state and beyond to Scotland, Germany and Japan as friends, new people and so on. Again he proved to be a fighter.

He made it through and one day as I was heading out I said Neico I love you. Can you show me you love me? He lifted his hands and made a heart!

From that day on, he continued to amaze his doctors and woo them with his love of music by playing his guitar and drums and always listening to music. He communicated with his hands and sometimes would write.

He was moved on February 2, 2017 to the North building for rehab. There, he was required to walk 300 feet by the end of February. He did that by day 3.

From there he progressed further and further with talking, walking and eating. He was released on March 2,2017 and he WALKED out of the hospital. Nico continues to amaze everyone with his persistence in getting better. He sits here and does school work, is continent, has regained both short and long-term memory.

He is running at therapy and is fully able to communicate with us. It has been 5 months since that fateful night and we are truly blessed by God’s hands that he has done so well and has survived the unsurvivable.

He will walk the podium. He has no sight but we and his friends will stand tall with him as he is handed his diploma.

He is slated to have reconstructive surgery on his nose and sinus area within the next few weeks. I am praying God guides the surgeon’s hands and continues to allow Neico to get stronger so he can tell his story in hopes of preventing someone else from going through this.

Thank you again for reading. 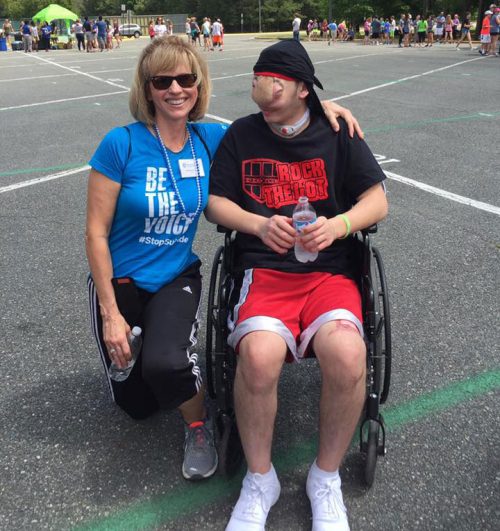 Videos of Neico before shared by his mom