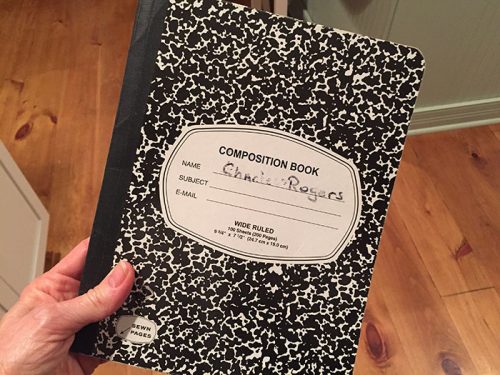 When Charles was at Wasatch Academy, he carried his rap diaries (as I call them) with him everywhere in his backpack. He wrote rap music in these notebooks. I swear he had at least 20 or more of them.

His Dad and I begged him to let us scan them. But he wouldn’t even let us see them. I know why now. They were very dark and he didn’t want us to know. He did share them with others, however. Funny, no one else was alarmed by these notebooks and their content. They clearly illustrate a struggle with depression, suicide, and drug use.

I wondered why they would punish him for dark thoughts. Honestly, I know they didn’t like anything that glorified drugs but this was his struggle.

Taking away his notebooks was counterintuitive. Did they think taking them away would take away his thoughts? This was his coping tool and it was a tug of war and I never was told about the songs about suicide.

The notebooks they did not take away, walked away

I asked his therapist why people would essentially steal his diaries and she told me that people that took them didn’t see it as stealing but saw it as taking a piece of Charles with them. He had shared his soul and many of them bonded with them. Others thought he’d one day be famous.

It broke my heart that his sweat equity was taken from him on a regular basis. Not only that, one of the staff told him he’d never make a dime with his music and his dream was a sham. What adult says that to a kid? And I was paying thousands per month for this school? Hard knocks school is such a dated approach.

It was such a violation and it was part of the reason we changed his placement.

Charles was only addicted to heroin for about 5 months from what I can surmise. And he only had one trip to detox and rehab before his suicide. He was a popular guy at rehab, totally embracing the program and inspiring others to participate in the therapy sessions. He shared his writing in some of the therapy sessions. One of these notebooks he had had since his stay at the NY therapeutic boarding school.

He was a popular guy at rehab, totally embracing the program after he got through detox and inspiring others to participate in the therapy sessions. It was very rocky at first. He shared his writing in some of the therapy sessions. One of these notebooks he had had since his stay at the NY therapeutic boarding school.

He loved sharing his writing and people loved reading it

It was raw and real and few others had a way with words like Charles did. He captured what so many of them felt.

Someone at the rehab, a young lady also suffering an addiction to heroin, asked to borrow one of them. She was discharged before Charles and as the story goes, she left it on her bed and asked one of the residents to return it to Charles.

It was never returned. Never found.

After he came home, he told me about it. He called and I called. That notebook was one of his originals. It was extremely important to him and too me. But it was not to be.

But it was not to be.

After he died and I looked through his facebook messages, I saw how diligently he pursued getting that notebook back. I messaged the girl who had had it.

I called again after he died. Nothing. I never even got a call back.

He mourned the loss of that notebook and I’m still mourning it. I still hang onto the hope it will turn up. I’ve imagined a dozen scenarios of how it, or any of them, might return. We have only 5. There is a lot packed on those pages but this is a piece of Charles I ache to have back.

I could let it go.

Instead, I have decided to entertain the fantasy that one or more of those notebooks will turn up one day. Never giving up hope.

A creative genius slipped through my fingers

5 thoughts on “The missing notebooks”