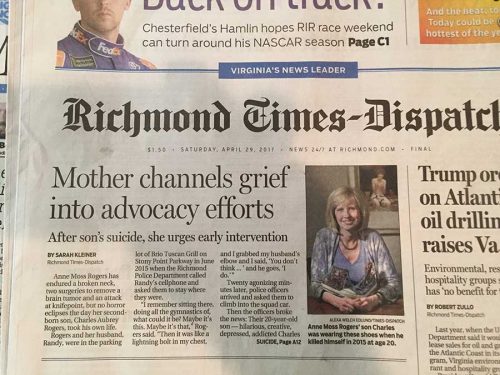 Thanks to your sharing and help, we’ve reached a lot of people! I get messages, notes, letters from so many who saw a post on your wall and got help for a friend, recognized signs of mental illness, suicide and addiction. Others have gotten the inspiration to speak out based on the same sharing.

Not for one second do I think I’m doing this alone. And for the first time in my life, I feel support–support that I so craved while advocating for my son before he died by suicide. Support that feels good, powerful and effective.

This is just a recap of recent local publicity that helped Beacon Tree Foundation, the non-profit for which I am president, raise the most money ever for youth mental health and helped reach more people so they don’t feel alone. Thank you to all involved including the reporters who want to raise awareness in our communities.

Copyright WTVR, Channel 6. Original video is here.  This is Greg McQuade’s award-winning brainchild and in this episode he dedicated 4:40 minutes to this topic. It’s typically 2:20 minutes. In air time, that is pure gold. I saw today that many of those who worked on this piece donated money to Beacon Tree. When I saw that, you know what I did because my tears will always be close to the surface. Heroes Among Us Series.

Article is here. Sarah Kleiner interviewed me and Tammy Farmer a while back. Tammy, one of the most resilient people I have ever met, is currently on assignment serving her country in the reserves.

Sarah responded to a media advisory I had sent about a Trees of Hope fundraising event and she went back to our notes from that meeting and wrote this piece. I didn’t remember what I had said to be honest so there were a lot of things about the final article that were a surprise. Not that I didn’t remember my own story, I just couldn’t remember what part of it we had discussed.

She had wanted to include Tammy but I had no idea how to get in touch with her and it was two days before our annual fundraising event. I didn’t know it was on the front page. I went to the drug store to get the paper that Saturday and when I put the paper on the counter, I saw me staring back at me. The topic of suicide had made front page above the fold. Kudos to RTD for giving this topic such priority. One 93 year old man decided to attend the Tree of Hope event. That story here.

This one with Drew Wilder on NBC-12. Charles Shelton and Haley Brennan discuss suicide and mental illness. 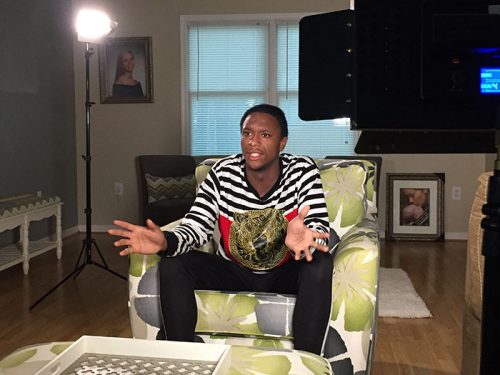 Families Have Hope for Healing

The Mission of the Beacon Tree Foundation

I got to tell the story of another family whose lives have been touched by mental illness and the fear of suicide. See the article. 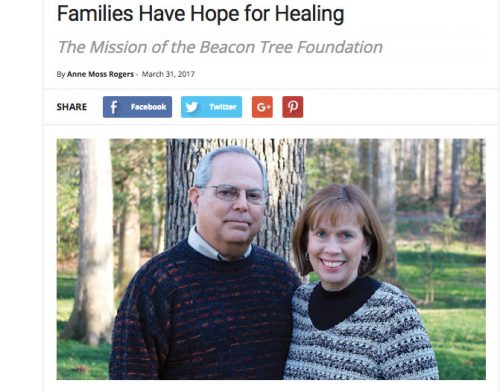 Amy Lacey does a series on Faces in Recovery. This award winning reporter features someone in recovery. Alex Chaffee is the star here having rallied for the cause of mental illness in the face of very little support. This program 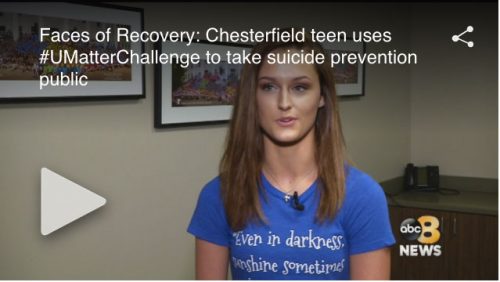 Henrico TV and producer, Steven Boyd was doing a special on suicide prevention and he got my name from Shirley Ramsey at about the same time I sent him an email about suicide awareness program. This 20-minute video is a collaboration of many telling their story.

Can Addiction be Prevented?There’s a new program for teens

This article in Richmond Family Magazine was shared so often by educators, mental health advocates, substance use disorder recovery advocates and mental health professionals, it is the #1 article of all time in this magazine.

It didn’t hurt that this program, Preventure, is a groundbreaking breakthrough in identifying personality traits that indicate a predisposition for addiction and provides the framework to prevent drug and alcohol abuse by teens by up to 80% in schools. 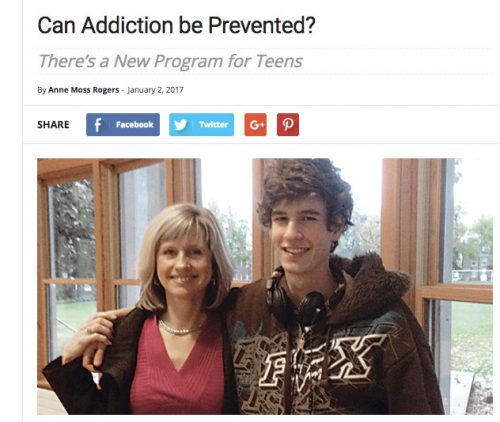 How Netflix’s ’13 Reasons Why’ is impacting Chesterfield County Schools

Since I am a mental health and suicide prevention advocate, particularly for teens and young adults, I often get calls about things going on related to that topic. I watched this show and had written a review and therefore was asked to offer my opinion for parents. Thank you again WTVR for spotlighting an important cause. 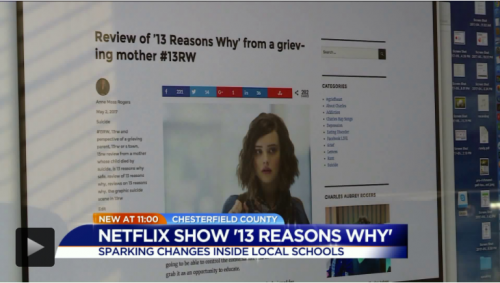 I refuse to bury my son’s memory

3 thoughts on “In the media”