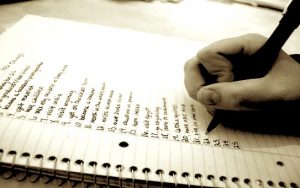 When I found out Charles was addicted to heroin and he was out of the house due to having walked out of detox, the fear that he would die overtook my life. I could barely function. I was immobilized by fear. There were times I had trouble breathing. No amount of yoga and running was doing it for me and I had to find some relief to the relentless premonitions, fear and despair.

So I made a list. What if he did die? What would I do first? So it had three things on it which I struggle to remember now but I know it had who I would call first, who I would call to get help with a funeral.

I know. So morbid. Who does this?

It wasn’t that I was trying to be prepared. What I was trying to do was give myself an umbrella. If you take the umbrella with you, it won’t rain, right? I needed some relief. I resisted trying this because I felt like I was writing his death certificate to do it.

Once I did it, I felt the release of thoughts I previously couldn’t get rid of no matter what I did. It was in my brain, why not put it on paper? I was still a basket case but I was able to function. And sleep. I felt guilty about it at first and then quite honestly I forgot all about it until the night he died.

It was a totally radical idea. Unfortunately, I had to use it. That’s the part that sucked. I really thought that by making the list, I was immune and somehow magically he would live. And that was probably why it worked for offering me relief.