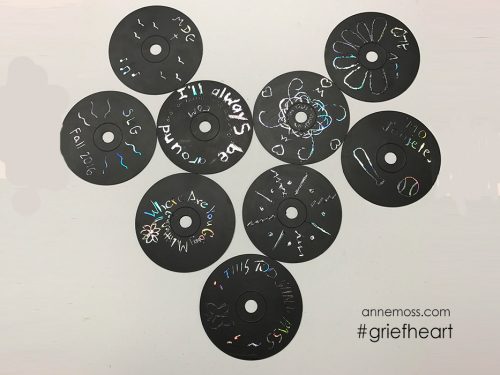 When I started this project, I wanted more people to memorialize their loved ones that died by suicide. I don’t get as many of those as I would have thought. But I got this today.

From Maryse at Full Circle Grief Center where they run support groups, one of them for suicide loss survivors. “Inspired by you, we laid painted CDs on which group members sketched a symbol or words to remember their loved one and then formed into the shape of heart.”

I thought this was so sweet and I was so touched. This group meant a lot to me and it helped me connect with others going through a suicide loss. It was in that group, the counselor told me to “keep talking” that talking about the suicide helps. Next step was a newspaper article and then this blog. I took it to extremes but I had to do it to help me cope with the loss of my son, Charles.