I posted this recently on my community page so I could run this as a “boosted post” to see what responses I would get. I excluded “friends” of the page (although some of you saw it this second go ’round).

I did choose an audience and chose those who had frequented certain pages which were in the same vein as my messages here. I spent $10 for this test. I ran this test November 4, 2016.

I wanted a barometer read on how those outside my circles were thinking on the subject of suicide. Kind of like what pollsters didn’t do during the 2016 election.

You can get wrapped up in what your group of friends think and since Facebook has gone to an algorithm-based feed (personalizing your feed to your taste), I am not always exposed to other opinions. Human beings like being with others who think like they do and will seek situations, programs, people, clubs that validate and share the same views and opinions they hold.

I was not surprised to see that outside my village, people were very opinionated on the subject and still tied to the shame and/or anger factor as it relates to suicide. And a lot who simply were unaware. Although some of the responses surprised me which I expected to happen.

I prepared myself before running it so I wouldn’t feel hurt –it is after all, my child’s picture. I wondered if personalizing would influence the commenters.

I took an objective, marketing view of it and saw it as a study

That worked for me. I was curious. And then for the most part I let it roll. As you can see below, when I do comment, I am matter of fact and unemotional, being careful not to make anyone feel challenged as that would skew the response to me as one of defensiveness.

I highlighted an especially lively discussion. I have realized that while I do like change, most people don’t. Some did understand. Others obviously didn’t.

Good experiment and I feel like I learned something. Lots of work still to do to educate.

The post and the comments are live here or you can scroll below. 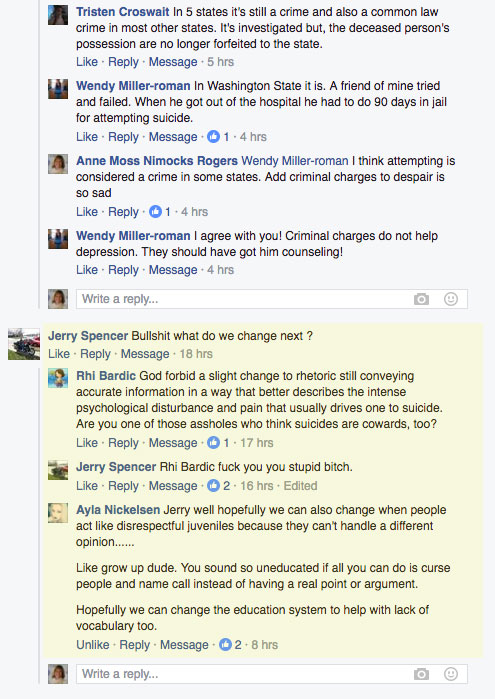 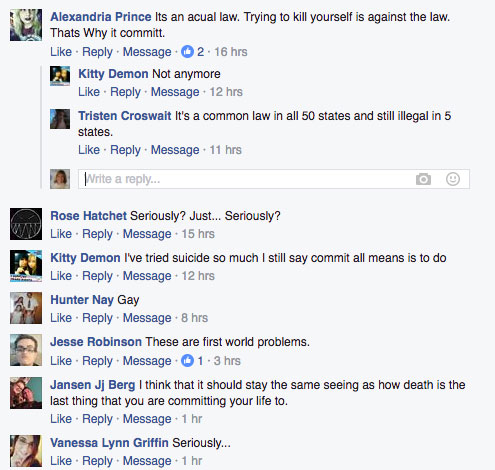