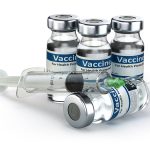 This is a vaccine. Not Vivitrol. I had no idea until Stas Novitsky of the Mcshin Foundation told a group of us about the heroin vaccine at the screening of a documentary about the heroin epidemic in Virginia.

We are in the worst addiction crisis ever.

People are dying every day in record numbers from this disease and the most promising vaccine for drug addiction ever is stalled.

Aside from the number of moms who will live with grief for the rest of our lives as a result of losses we have suffered in this crisis, it is costing our country billions and will cost us trillions.

How does the heroin vaccine work?

Basically, once injected, it takes away the “high” an opiate can produce. Opiate meaning fentanyl and heroin for example. It is intended to prevent relapse. That’s pretty huge when you consider that heroin addicts relapse an average of 7 times.

This quote from Caron Block, a mom with a child who suffers from addiction, who has made it her goal to get this vaccine into human trials.

“Scripps Research Institute in La Jolla, under the direction of Dr. Kim Janda, has developed a heroin and fentanyl overdose prevention vaccine. The vaccine keeps the heroin and fentanyl molecules from ever crossing the blood-brain barrier so there can be no high, no overdose and no death. In fact, in pre-clinical trials, cravings were reduced and even eliminated.” (A one pager is available at the link below.)

Vivitrol is a currently available option that is either taken daily, injected monthly or offered as a surgical implant which is good up to three months. And recently they have developed the implant to last 6 months. That, too, blocks the high of an opiate but it works for a limited time. I am thankful we have that.

So why is it not available?

The pharmaceutical companies aren’t willing to bankroll it. Not enough money in it for the human trials which is the next phase.

Suboxone and Methadone, on the other hand, have big residual income. People keep coming back and that is a money maker.

So it’s like a subscription model which is more profitable than a one time sale like a vaccine. This is the industry that brought us the problem, yet they can’t bring themselves to get together and throw in tens of thousands to fund the human trials of something so promising?

I get that the pharmaceutical company that developed suboxone and methadone does not want to cannibalize their own market but I’m surprised a competitor doesn’t throw money at it for the advertising goodwill alone.

Think of the positive PR if you were the pharmaceutical company that funded the next phase of human trials–an orchestrated series of videos of grateful moms and dads alone on social media would be worth millions in positive advertising and boost a brand image through the roof.

All they’d need to do is throw in $60,000 which is the amount of money that falls out of their pockets when they walk away from a conference room table. That’s far less than what they’d spend producing a TV commercial, not even counting what they spend to run the damn thing. That company would be hailed as heroes!

So it sits there underutilized while people all over the US die or fight relapse over and over draining families financially.

Dr. Kim Janda’s You Tube video on the heroin/fentanyl vaccine

Who is to blame for the opiate crisis?

7 thoughts on “Did you know there is an opiate vaccine?”