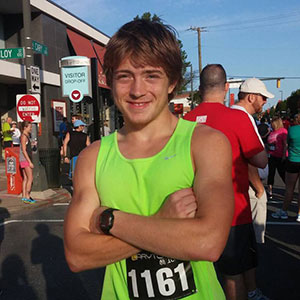 I declared war on Evil ED shortly before my son Logan turned 16. The disease crept up on him subtly and gradually until it had a death hold on his brain.

Evil ED does not discriminate. It’s an equal opportunity life destroyer. The common myth is only young females have eating disorders. Not true.

Evil ED’s victims are girls, women, boys and men. They are all races. They are high school cheerleaders, football players, baseball players, wrestlers, runners, over achieving students, artists, writers and the list goes on. Some are ten-year-olds and even younger. Most I met were teenagers. Beautiful souls and so misunderstood.

Logan ran track, played football, loved his middle school and was growing up to be a strong young man transitioning to the ninth grade. Blonde hair, blue eyes and fair-skinned, Logan was in perfect shape because of his fierce dedication to physical fitness. He had a small frame without an ounce of fat.

Something strange started going on during the summer of Logan’s 15th year. He would say the Evil ED grip began applying its pressure at age 14.

Maybe Logan’s behavior change was a delayed response to the loss of his father who died by suicide when Logan was nine-years-old. Maybe he inherited mental illness from family who suffered from depression, anxiety, bi-polar and manic depression. Maybe it was a chemical imbalance that brought on debilitating anxiety and mental pain, which later manifested itself as borderline personality disorder.

Logan was fiercely dedicated to being a good athlete. At ages 15 and 16, Logan avoided smoking, getting high or taking drugs to ease his anxiety. He knew drugs would get in the way of his dream to be a great runner.

He resorted to food, but the thought of gaining an ounce horrified him. He was a little chubby as a boy, teased by his peers because of it, and vowed to himself he would never be that awkward kid again.

But the anxiety was unbearable. He would cut himself to bring relief and mindlessly eat, both of which are common signs with Evil ED’s victims.

It started with the peanut butter. An entire jar would be gone in a day. Then the ice-cream. All of it gone in one sitting. I found hidden candy and food wrappers in Logan’s closet and crumbs of chocolate cake in his bathroom, with the empty cake box stashed in the cabinet under the sink.

In denial, I thought this is a growing boy who is extremely active. Don’t all teen boys eat like crazy?

When Logan had dinner with the family, he limited his intake of food to a salad, then ravaged the refrigerator when I wasn’t looking.

After the third downed jar of peanut butter in record time, I confronted Logan about his eating and he got extremely defensive. Something was up, but I did not have a clue.

I took Logan to his pediatrician for guidance. Perhaps he needed to see a specialist or therapist, but she didn’t see a problem. She advised Logan to stick to the basics of the food pyramid and everything would be ok.

Evil ED, meanwhile, was snaking its way through Logan’s mind and body, fooling everyone, even his doctors.

The strange behaviors continued. Food quickly disappeared as soon as I brought it in the house. I had to hide the groceries in the car and wear the keys around my neck.

And the purging began. Logan engaged in a vicious cycle of consuming large quantities of food, any food, eating bowls of flour and water, consuming raw oatmeal, followed by purging. He purged several times a day.

I couldn’t find the right help at first. I read books on eating disorders and spent hours on the internet searching for answers. I called hotlines and helplines and set up appointments for Logan to see a psychiatrist, only to be put on a long waiting list before Logan could get a visit in.

One of the hotline counselors led me to a support group for people with eating disorders. Logan went, which did not help, like expecting a cancer patient to talk his health issues away.

I sent Logan to an eating disorder therapist who came highly recommended. She completely under estimated the severity of his illness. She had him write about his feelings.

Finally, I connected with a wonderful neighbor whose daughter battled anorexia. She was the first person to set me on the right track.

By the grace of God, I was referred to the right therapist and after the second visit, he looked Logan in the eye and warned both of us if he didn’t get into treatment immediately, he could die from Evil ED.

Within a few weeks, going at warp speed, I took Logan out of the ninth grade and admitted him into the Eating Recovery Center in Denver, Colorado. He was there for two months in a tightly controlled environment where he was on a strict diet and could not purge.

During his stay, he was restricted to a wheel chair for one to two weeks because his heart rate got dangerously low, around 35 beats a minute when he was sleeping. The purging depleted his electrolytes causing a temporary heart condition called Bradycardia.

An eating disorder specialized medical team worked tirelessly with Logan to re-wire his thinking, squeezing Evil ED out of the picture, but it never completely disappeared. During his last three weeks in treatment, Logan’s step father Jack and I flew out to Denver for the intensive family therapy program. We took day-long classes everyday to learn how to take care of Logan once he got home.

Logan stabilized. He had setbacks, but was able to move forward with the help from his family, medical team and his own determination.

He relapsed when he was 18, and returned to the Eating Recovery Center for three weeks. Logan went into the adult residential program, which was not as effective for him as the adolescent care was. His anxiety was more than what they could handle.

He was gradually gaining the knowledge and skills to deal with Evil ED on his own with the help of others. There were long stretches of time when Logan felt he had his eating disorder under control. And there were times when he struggled, but he was never as sick as he was at age 16.

I speak of Logan in the past tense because he died in a truck crash less than one mile from home when he was 19. This happened just a few months ago.

While Logan has gone to the next dimension (his reference to Heaven), I feel him working through me.

Logan had a deep empathy for others who were chased by Evil ED.

I know he wants me to carry on his message and his story. (see a facebook post he posted in March 2016)

“I am who I am and I am beautiful. And so are you. You can be your own best friend or worst enemy. Be kind to yourself despite your flaws. ” Logan Neale