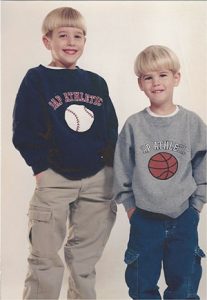 Charles was so cute. Everyone thinks that about their child. Charles is on the right. Charming, effervescent and full of bubble and fun. We never went anywhere his life that the whole room did not react to him like moths to a flame.

He had “it” and now he’s gone, a tragic suicide as the result of depression and addiction. And you know the worst part? He was ashamed of his illnesses. I think part of that is why he killed himself. It’s time we stop shaming people. Who’s in?

Get updates to this blog subscribing

My suicide prevention program for middle and high school students

One thought on “Cute as a button heart – #griefheart number 162”