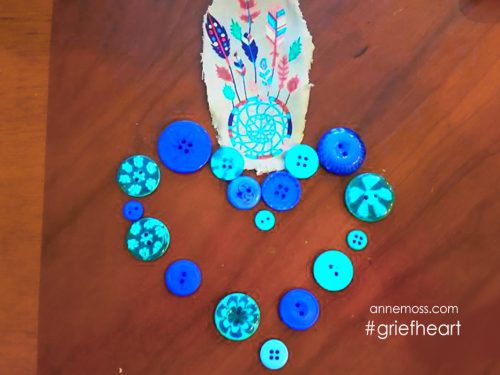 “My brother Jefferson Joseph Blanton-Harris (“Joey”) was 25 years old when he died by suicide on 5/20/13. He is my little “bwudder,” and always will be. I chose the blue color buttons in this photo because he has the most beautiful, striking blue eyes.

He has 7 older sisters, all with brown eyes, so his eyes really stand out. I chose the dream-catcher because I have several times seen him in my dreams. I use the present tense when speaking of him, for I believe in his true presence in my dream-state, not “just dreams.” I believe he lives forever, in my heart, mind, and with the Lord.

I am an RN with over 20 years experience in the psychiatric field, as well as a peer in the mental health community. I am also a wife, mother, poet, musician, and writer of the blog Girlfriend’s Guide to Good Mental Health.” –Carol Borrelli, RN

Would I do it all over again?