The irony in this rap song is downright eerie. And the bullying Cal endured ate at Charles.

Cal died by suicide almost exactly 2 years to the day before Charles did and by the same method. I don’t think Charles’ death was in any way a copycat. Charles wrote two songs that I have but I am sure in his lost notebooks he had others about Cal.

In the history of the wilderness program he attended in Clayton, GA, no two kids from the same hometown, much less the same high school ended up in the same group. Charles and Cal did. And they forged a bond. It was just like Charles to embrace friendship with someone who suffered so from being different. He is obviously very angry and when Charles said, “I would have stood up for you,” he meant that. He would have.
—–
Comin’ on that real shit,
Guarantee I can make you feel this,
Come a little closer and taste my pain,
You won’t look at me the same when we see face to face.
How can we escape the hate?
I gotta get out of this place,
Welcome to the suicide symphony,
My friend Cal had an eerie way of sayin’,
“You fuckers will remember me,”

You pushed him too much,
Whoever it was I hope it stains your fucking memory like it did to me,
Picture it visually while I’m missing sleep, withering,
Thinkin’ maybe I coulda made that end different,
I woulda stood up for you.

He was so happy, he was a friend to me,
I still remember the last thing you said to me after wilderness was over for you, the 2 months you lived with me,
You may have died but I’m keepin’ your memory alive,
Welcome to history.

After– I bet everyone was like, “Oh shit we were friends,”
When in reality you were teasin’ him,
I hope you bleed within,
And your conscience eats you and eats you again until you feel your sin in each of your limbs.

I hope every time you sleep,
you dream of him every single day til your breathin’ ends
I was supposed to come home and be your friend

Why does it hurt?
God can I ask what the reason is?
I just want someone to blame, I just wanna escape PAIN,
Why do preachers preach lies,
Why do people die? God please just give me a reason why?

Why were we put on this EARTH
Just to hurt, just to hurt
Why the fuck did you create the universe?

Fuck it’s really hittin’ now,
I hope you know your family misses you Cal,
I wasn’t able to go to your funeral,
I bet it was beautiful!

I’m yet to see your cemetery, Death is scary,
I cried for the first time in a long time when I read your obituary,
You were the only one from my hometown that saw me at my LOWEST,
when they took away my shoes cause everyday I’d try and tie a noose,
Who knew that’s the kinda shit that would happen to you,
Somethin’ you could actually do.
When I used to write suicide letters to my own mother,
Slept next to the staff under the covers,
We called ourselves woods brothers.

You reached out to me,
your mother would’ve proud to see all you did,
How happy you were,
WHY’D YOU GOTTA GO AND LEAVE THIS EARTH?
I’m askin’ God, not a single reason heard.

Why were we put on this EARTH
Just to hurt, just to hurt
Why the fuck did you create the universe?

Remember in wilderness you climbed trees and screamed you ain’t comin’ down?
And we would all laugh cause you was only jokin’ around,
ONLY NO ONE’S LAUGHIN’ NOW! CAUSE YOU’RE NOT COMIN’ DOWN,

In the tunnel the fucking cops called your memorial vandalism,
Fuck those police, aren’t you supposed to be protecting the streets?
You didn’t stop Gorski from robbing those children at knifepoint,
But you took his memorial down at least,
I hope you fill guilty every time you breathe,
Oh you’re such a hero Mr. Cop,
I’m kidding, my sarcasm is deep.

This is as real as it gets,
Cal I promise they’ll never forget,
I’ll put your memorial in this rap shit,
Let’s see’em try to get rid of this,
cause you helped me a lot kid, you really did.

Even though you were sick,
Gave your tongue a slit so it would flick like a snake lick,
You was different,
But you said they used to tease you,
I don’t know who you are but I hope it eats you,
Cause it eats me,
Not a day goes by where I don’t think maybe I could’ve saved your life. 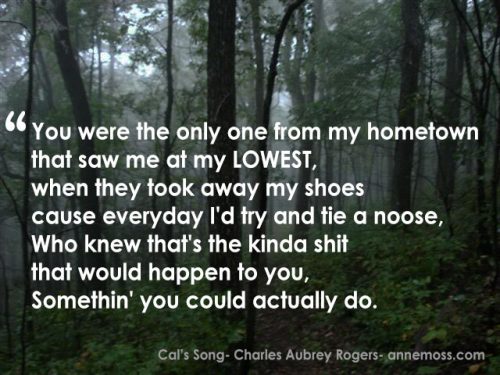