Several times I have run this campaign for Beacon Tree Foundation. The deal is you run the “campaign,” it ends and then they ship out the shirts. There is a minimum that has to be met for the shirts to be printed so it’s not ongoing.

What’s cool is that the shirts are conversation starters.

It really warms my heart that both of these friends felt comfortable enough to wear the shirt and have that conversation–to reach out to help another human being in pain.

Thank you Liz and Melissa for sharing your stories with me. You know how much they mean to me.

The first thing happened when I was wearing my Beacon Tree shirt and the person I was in conversation with read Charles’ quote and I noticed she was tearing up.

What followed was a very emotional connection and she shared her story of losing her son to suicide after a long battle with mental illness and substance use throughout his short life. I was honored that she chose me as the first person entrusted with her truth since his death.

If not for Charles’ words on my shirt I can’t say that moment of courage for her would have come to take that leap of faith.

Hey A-M…have to tell you about something that happened today. I ran into Costco to pick up something and as I was looking at my options, a woman walked up to me. She asked me if she could finish reading my shirt, which was my Beacon Tree shirt with Charles’ insightful words.

She met my eyes and I could tell she was in pain. I explained about the quote, Charles, and the work you’ve been doing to change perceptions about mental illness and suicide.

She then said her son had tried to kill himself a week ago, A friend saw his Snapchat and immediately went to him, and he has started medical care for his depression.

She’s anxious and scared and felt very alone, so I passed on your information and blog. I assured her she was not alone and would see that clearly when she read your posts–she was so grateful tears welled in her eyes. She thanked me profusely.

I don’t know if she will reach out but I do know that hearing about someone who had been through hell and was now speaking out made a difference. And you do–every day! Hugs and love, my friend. 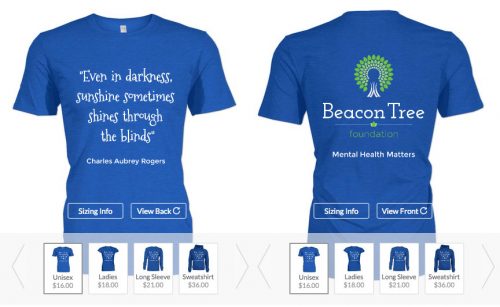